Ancient Egypt was opened for a lot of migrants, who were engaged in the various activities, which ranged from the simple workers to the high officials. For example, there is a strong proof that the biblical patriarch Joseph (Hebrew: Yosef; Arabic: Yusuf) is the High Priest, a vizier and a chancellor of the king Djoser, Imhotep ("who comes in peace").

The royal name "Djoser" is probably the same as "Caesar", because "dj" can be pronounced as "ts" in the ancient Egyptian language, and also the exact pronounciation of the words is unknown. The British Egyptologists pronounce this word in their manner. The names of the Mesopotamian kings often have the ending "-sar”. The word "Djoser" is written by one hieroglyph, and the Egyptologists had translated it as "magnificent" or "holy".

The reign of Djoser was at the beginning of the Akkadian civilization, and Imhotep brought to Egypt a knowledge of the oriental medicine and the construction. Since that time, the images of the Egyptian kings acquired the Babylonian false beards.

Samaritans (Hebrew: Shomronim) is a people of "guardians", who consider theirselves to be the descendants of Joseph. They do not consider themselves to be Jews, though they profess some kind of Judaism with the non-canonical books. The Jews consider the Samaritans to be pagans, and do not agree with their noble origin, because the Samaritans offered the “golden calf” to the Jews (Quran, 20:85-97). The evangelical «Good Samaritan» corresponds to Imhotep («who comes in peace ») also.

Jacob (Arabic: Yakub) is the Joseph's father. According to Bible, the God gave him the name Israel, because he tried to overcome the God in the form of angel in a dream, and so he can overcome people. Israel is the name of people, the descendants of Jacob, who conquer other nations. Jacob moved to Joseph into Egypt, under the protection of which, the 12 tribes of Israel were descended from the Jacob's sons.

Zebulun is a name of unknown origin, the Jacob's son, the founder of a tribe. Jahbulon, according to the Zulu shaman Credo Mutwa, is the horned king of the reptiles Chitauri, which are the gods and ancestors of the Zulu kings[1]. The Zulu kings are known for their art of war and, according to the available images, they have unusual proportions of their bodies (wide hips, narrow chest), as observed also in the images of the Akhenaten Egyptian dynasty.

Lemba is an African people, the neighbors of Zulus. The Lemba are genetically close to the noble Jewish priests (Kohens). They see themselves as a lost tribe of Israel, and they confess some kind of Judaism, and also Christianity and Islam.

Origins of Christianity and Islam

The cult of resurrected Osiris and the "Book of the Dead" (actual name of this book is "of emerging forth into the Light") represented the afterlife judgment and the purgatory for centuries before the rise of Christianity and Islam. The ancient Egyptians prepared themselves for the afterlife, while the surrounding peoples had not a clue about it. The modern religions had adopted the following elements of the ancient Egyptian rituals:

The Egyptian "Book of the Dead" is not unique, for example, the “Tibetan Book of the Dead" (“Bardo Thodol") contains another representations including a multiplicity of worlds and the reincarnation.

The Semitic nomads "Amu" (Amorites) invaded into Egypt. The forefather of Amorites was the biblical Seth. The same name has the Egyptian god of evil, Seth (Satan).

The Hyksos are considered the Semitic tribes of shepherds who seized power in Lower Egypt, when the Second Intermediate Period came after the Middle Kingdom. The historian Manetho called Hyksos the "shepherd kings" or the "captive shepherds". The word "Hyksos" without a Greek ending "-os" and read backwards (in Semitic or in Old Egyptian) gives the word "skyh", which associates the Hyksos with the Scythians, who were also called Saka in those lands. There are also the additional facts: 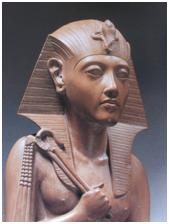 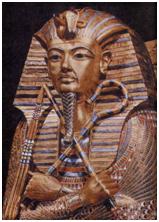 The Second Intermediate Period was ended by the expulsion of Hyksos and the beginning of the New Kingdom with the famous XVIII dynasty of kings. The Egyptian empire began to conquer the surrounding lands.

Pharaoh (Arabic: Firgaun) is a word derived from the Egyptian "Per-Oh" ("great house"). This is a title of the kings of the New Kingdom. Many images of the first pharaohs have their featuring attribute: the rod in addition to the whip, which emerged in the Middle Kingdom. The Rod of a shepherd-king (pastor) was transformed then into a sceptre of the Christian kings.

Ahmose I (Yah Mesu) is the first pharaoh of the New Kingdom. This name is translated as "born by Moon". But as only the gods could give birth to the kings, the Moon god "Yah" came, who was unknown before. The Jewish god Yahweh (Jehovah) is the unknown Egyptian Moon god "Yah", the cult of which was never in Egypt. The Yahweh begins to be mentioned in the Torah since the Exodus of Jews from the Egypt at the times of New Kingdom.

The Moon is an object of worship for the South Asian peoples. The crescent is a symbol of Islam. Jericho (Arabic: Ariha) is the “City of Moon" (from Hebrew: Yerich, moon), which was founded around 8 thousand years BC. The Jewish calendar is lunar, that is, all months of a year have 29,5 days averagely.

The cult of the god of wisdom and writing Djehuty (Greek: Thoth) rised unexpectedly by the beginning of the New Kingdom. It is apparently associated with the tribe of Judah (Hebrew: Yehudah), which cognates with Djehuty (Hebrew has no sound "ʤ"). A pharaonic dynasty of the unknown origin as a part of the XVIII dynasty emerged under the name Djehuty-Mesu (Greek: Thutmose), which is translated as "born by Thoth". Thutmose I was the successor of Ahmose I and the Moon became a habitat of Thoth since that time.

Later, Thoth became associated with the Greek Hermes (Roman: Mercury), the god of trade, profit, agility, cunning, theft and eloquence. The Hermes Trismegistus is a mythical person, who founded the hermeticism. He embodies the magicians, alchemists, astrologers, and other sages. The Tarot cards, from which the ordinary playing cards originated, are the Hermetic attribute.

The tribe of Judah is associated with all Jews in general. The autonym "Yehudi", the Latin root «jud-» and the Slavonic word "zhyd" are derived from this name. King David and King Solomon came out of the tribe of Judah.

Hebrew (Jewish) is a word that comes from the Akkadian "Habiru" ("Apiru"), which indicates a nomad, a rebel, a thief, a slave, a migrant worker of the Semitic origin.

Kheper is a word used in the king's name since the XII dynasty immediately before the Hyksos invasion. This word is written by one hieroglyph Scarab (Kheper). Matching of the Egyptian words "Scarab" and "Jew" (of Akkadian origin) led to the sacred significance of a dung beetle, and its ball of dung was associated with the sun rolling from the east to the west. Also the scarab shaped seals were produced. The seals were used for the first time in Mesopotamia (see "Cylinder seal"). The egyptologists translate the word "Kheper" in the king's names as "to develop" or "to come into being".

The word "Kheper" is in the royal names of almost all pharaohs of the XVIII dynasty:

Hatshepsut is the first woman pharaoh, the daughter of the Thutmose I and the queen Ahmose. Pharaohs of those times, like the leaders of the modern states, were not the brave warlords who lead the battles. The egyptologists translate her name as "Foremost of Noble Ladies", and in fact she is the Queen of Sheba (Sheba = Shepsu), as I. Velikovsky believed. Hatshepsut allegedly was a ruler of the Land of Punt or Ta-Neter (land of gods) on the south coast of the Red Sea, which is supposedly located in the Somalia. On the other side, the Sabaean kingdom (Sheba) was located in the area of Yemen on another southern shore of the Red Sea. Hatshepsut is not included into the Abydos and the Saqqara lists. The confusion between Hatshepsut and Cleopatra created the legend about a relationship of Hatshepsut with Solomon, as a relationship of Cleopatra with Julius Caesar (see also "Rome and Israel").

These photos show the too long skull (dolichocephaly of Neanderthals) with a convex back of the head and a thin neck, which are the Semitic features. Many pharaohs of the succeeding dynasties before the Greek conquest of Egypt had the similar heads. It is amazing that the mummies of the earlier centuries are not exhibited in the Cairo Museum despite many finds of them. It looks like all the Egyptian kings had such appearance.

The congenital elongation of a skull is common for the descendants of such ancient Semitic tribes, who were not mixed with the Aryans intensively. For example, the Egyptian Copts and the Arabs of Yemen have such feature.

The Copts (Egyptians) are the modern descendants of the Semitic elite of the New Kingdom of Egypt, who traditionally keep the purity of their race as all the noble Jews.

The cult of an elongated skull was also propagated in the distant from each other areas of the North Africa and the South America. The children wore on their heads some tools, so their growing skulls were deformed. Thus, someone attempted to develop the "divine" superhuman abilities of shamans by imitating their appearance. The volume of a skull was not increased in this case. But the archaeologists find sometimes the skulls, the volume of which is 1,5-2 times higher than normal: 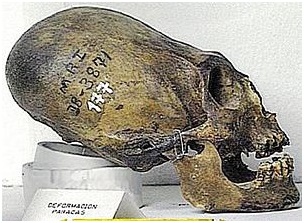