Picture made with Google Earth

Arkaim and Stonehenge are the structures, which were built about 4-5 thousands years ago. They are located almost at the same latitude. Their positions together with the North Pole and Upper Egypt are shaping the almost equilateral triangles (see also "Cosmic bodies"). Perhaps, the Egyptian worshipers to Sun (Ra) created new colonies in Eurasia before coming of the foreign Amun cult into Upper Egypt. The ancient city of Thebes (Egyptian: Waset), which became a capital of Upper Egypt about 4 thousands years ago, is known as a center of the Amun-Ra cult. The ancient name of the Volga River is Ra, the same as the Egyptian Sun god. The probable origin of the Russian word “raduga” (English: rainbow) is a bow of Ra, a solar bow (Russian: duga). The rainbow also has the sacred significance in the Old Testament. A few of the currently known ancient Egyptian words from the basic vocabulary cognate to the common Indo-European roots:

Arkaim and Stonehenge are built using almost the same unit of length: 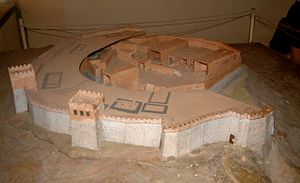 Reconstruction of a Trojan fortress 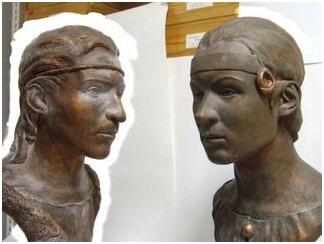 Reconstruction of the Arkaim inhabitants by the Gerasimov’s method

Gobekli Tepe (the southeastern Asia Minor) is the oldest megalithic structure in the shape of concentric rings, which age is about 12 thousand years (before the Middle-Eastern Neolithic). Asia Minor is a center of the ancient world located almost at the center of triangle Thebes-Stonehenge-Arkaim. The Bronze Age began within Asia Minor since the VII millenium BC.

The Goseck circle is an ancient prototype of Stonehenge aged about 7 thousand years. Both structures are located in the same latitude with an accuracy to 1 arc minute.

The mythical Troy or Ilion ("solar city”) is a fortified circular settlement in the northwestern Asia Minor, the predecessor of Arkaim, which belongs to the same culture. Ilion was founded (3,000 years BC) at the beginning of the commonly known Egyptian history (Early Dynastic Period).

The wheel is a cultural feature of the Aryans and their ancestors, who migrated gradually during V-III millennia BC from Asia Minor across Danube (Cucuteni-Trypillian archaeological culture) into the Central Black Earth (Yamna Culture) and further to the east. The Trypillian fortified settlements were also circular.

Arkaim relates to the Andronovo culture and to the Aryans. The fortified settlements of the Andronovo culture, one of which was Arkaim, is a place of the Aryan race formation. The name of Arkaim comes from the Indo-European root "ark" and the name of King Yima (Yama, Jamshid). The root "ark" means safety, secrecy (Latin: arcanus), and litteraly the ark (Irish: airc, German: arche). Indeed, the Zoroastrian legend of Yima tells about the fortified settlement "Vara" as some mixture of the Noah's Ark and the Garden of Eden: «O Yima! To this mighty Vara then carry families of all males and females who are on this earth most exalted, most excellent, and most beautiful. To the Vara carry the families of all sorts of cattle on this earth, which are most exalted, most excellent and most beautiful. To that place carry the seeds of all trees which are most exalted and sweetest of odour on this earth, carry the seeds of all food most eatable in this world and sweetest of odour. Make these couples unfailing in their love, and everlasting by reproduction; so long as the Aryans stay in the enclosure. There should be no person who quarrels, no one who slanders, no impure person. There should be no one with filthiness, no one with deceit nor meanness. There should be none speaking evil words, no one with an embellishment of evil spread over the body (a skin disease), no one here who in general has any characteristic of the evil one. Make three levels in the mighty Vara. In the uppermost level, make nine such wide enclosures, in the middle level, make six. In the lowermost level, make three enclosures. In the uppermost wide enclosure let 1000 couples, men and women live. In the middle let 600 couples live, in the lowest enclosure let 300 couples pass their lives. High above each of these enclosures, use a golden instrument and make doors and windows. By self-light should the inner parts be illumined»[2].

Aryans of the Andronovo culture were the first, who invented the iron processing (bloomery) and the using of chariots, thanks to which they spread around the available world and were mixed with the local population including the ancestors of Chinese and Turkic peoples. This theory is called the Kurgan hypothesis:

Distribution of the Aryan chariots with dates (years BC). Textual notes are about their alleged ethnicity.

A metallurgical plant, about 3000 years old, was found in the territory of Luhansk oblast [1].

The Aryans are also known as Hyksos (see "Judaism") and Dinglings (see "China and Japan").

The Scandinavians called the Aryans "Æsir", and Arkaim was called Asgard (city of Æsir). The Swedish "Ynglinga saga" refers to the country of Æsir, the ancestors of Swedes, which is located in Asia (land of Æsir), to the east of the Don River. The Greek name of Asia could be given by the ancient Swedes. The archaeological excavations of Thor Heyerdahl confirmed also the Caucasian origin of Vikings [2].

The Aryans came into the ancient India and Iran at the second half of II millennium BC, became the social elite and brought the Vedic culture there. Also the Vedic literature and Sanskrit persuasively links the Aryan North India with the Slavians, and put it somewhere at the center of Eurasia. This follows from the high similarity of Sanskrit and the Slavonic languages (see "Indo-Europeans"), and also from the meaning of words with the root "bharat":

According to the theories[3] of historians N.R. Guseva and S.V. Zharnikova on geography of the main events of the Indian epic Mahabharata, the center of the Slavonic-Aryan Empire Bharat was located somewhere at the Central Black Earth. This region is rich in the black soil and also in the iron ore (Kursk Magnetic Anomaly), which was used by the Aryans. This area is also known as the oldest (about 45 thousands years) settlement of the Europeoid race.

A slavonic word "slon" (elephant) is the root of Russian word "zaslon" (barrier). The ancestors of Slavians used the war elephants for defense.

Pandavas and Kauravas are considered the cousins, the grandchildren of a holy hermit Vyasa (Vyasadeva), who wrote the Vedas, and he was a descendant of the seven great sages Rishi, who came from the north (from the constellation of Ursa Major). However, the Semitic influence was significant at Middle East and India at that time, and almost all the Indian kings belonged more or less to the so-called Lunar dynasty. The Pururavas is first king of the Lunar and many subsidiary dynasties, the son of an androgyne (hermaphrodite) Ila (see also "Adam"), that is, of the ancient Semitic god (Ilu, El). Also it is considered that all the kings’ dynasties are descended from their progenitor Manu, the history of which is remarkably similar to the story of biblical Noah. The Lunar Dynasty is also closely bound with some serpent-people "naga".

Veles is a serpent, the lord of cattle.

The struggle of Aryans against the serpent-people "naga", as described in Mahabharata (the Kuru king Janamejaya against Takshaka), is one of the main Aryan myths. This myth corresponds to the tales about Dragons (“Zmey Gorynych” in Russian). In contrast, the Dragons are sacred for many non-Aryan peoples.

Construction of the Serpent’s Wall indicates a high organization of people who inhabited the ancient Central Black Earth and its surrounding areas.

As the Rome (see "Rome and Israel") developed, the Bharat Empire decayed and gave a way to the small Pars, and India soon became a weak isolated country. The miniature Bharat was recreated in India with the dirty rivers in the jungles. Similarly, the Zionists have created a miniature Palestinian Israel with the muddy rivers and the small lakes-seas in the XX century.

Kashmir is the partly independent state known as an ancient cultural center, which arose in the II millennium BC at the northern India and Pakistan. A lot of aggressors still did not conquer this state. The Kashmiri language is close to Sanskrit of Rigveda, the oldest Vedic text, which mentions also about the Bharatas. The Kashmiris with a surprisingly light eyes and the Europeoid facial features could be found among the modern multi-ethnic population.

The sarmatians is a Greek name of the Aryan (Iranian) nomads, which originates from the Slavonic name of a rawhide ("syromiat"), which was provided by the Sarmatians. The Old Slavonic name of the Sarmatians and the Ossetians (the Caucasian descendants of Sarmatians) are the Iazyges or the "Yas"es (like the Scandinavian Æsir). The Slavonic paganism (Russian: Iazychestvo) came from the Iazyges and based on the Aryan beliefs.

The pagan is a translation of the biblical Hebrew word "goy", which means another faith (not Judaism), that is, a non-Jew. The Latin word “paganus” means "rustic", "villager" etc. The Paganism is a folk faith or a national faith. The Christianity is a faith imposed to the nations by their elites under the Jewish influence.

Svarog is a Slavonic god and one of the first human ancestors, who is called the Manu Svarocisha according to Mahabharata. The mythical forefather of the Slavians is Orey (Arian), who got then a meaning "plowman".

The pantheons of the Aryan gods and deities have a large list of the similar gods with the different national names. Almost all the gods are the anthropomorphic heroes of epics. Many Roman gods are linked to the planets, the astrological signs. 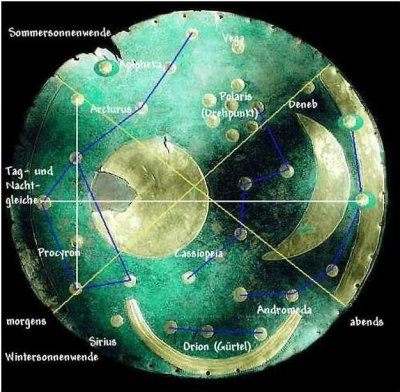 Arkaim and Stonehenge, as known, determine the dates of the solstices and the equinoxes, i.e. these structures are the calendars. Thus, these dates are bound to the pagan festivals, which were later converted into the Christian holidays.

The word "calendar" comes from the Sanskrit "kala" (time), Slavonic “koliada” and Latin "calenda". The division of year into 12 months came into Europe with the Roman calendar based on the Middle Eastern tradition.

The Nebra sky disk, which is dated XVII century BC, was found 20 km from the Goseck circle. In addition to the arcs at the disk edges, which indicate the solstice and equinox, the arc near Orion's Belt (Orion was called "Kolo" in Rus') recalls the determination of a precession of the equinoxes cycle by the pyramids of Giza (see "Egypt").

The Easter egg is an ancient image of the World egg, which is not related to the Abrahamic religions. The painted eggs are also consumed at the spring holiday of Nowruz according to a Zoroastrian custom.

The cross is a symbol of Aryans, which later became the Christian cross that is similar to the Egyptian cross Ankh. The equilateral cross symbolizes the following:

The Aryans presumed the vertical world, which consists of the highest heavenly world, the middle earthly world, and the lowest underworld. Later, these concepts were mixed with biblical Garden of Eden and the place to burn the victims (Gehenna) in Moloch's cult.

The imaginary heavenly world is not only the luminous home of many gods, but also the home of the decent people, who have left the earthly life. The imaginary dark underground world is always associated with sufferings and death.

The cremation is an Aryan ritual of the ascension, which is preserved by the Hindus in its original form. In general, the Aryans burned all obsolete and unnecessary things such as their abandoned fortified settlements. The Christians believe in the literal resurrection, so they prohibited the cremation.

The famous spiritual teachings of Indo-Aryan origin are: