According to the rumors, the Americans had recently found a flying disc in Antarctica. Internet distributes the fairly realistic pictures without reference to a source of information.

Apparently, these machines belonged to the lost ancient civilization. Probably “The Emerald Tablets of Thoth the Atlantean” tell about such ship describing the Sphinx (see "Egypt"). The ancient Egyptians used a word "merkabah" for a magic vehicle, which came into Hebrew in the meaning "chariot". The Hindus knew about the flying ships built by the Asuras and the people of "iona" (Ionians or the ancient Greeks). They called it "Vimana" and had written a text "Vaimanika Shastra" in a language, which is incomprehensible for the modern science. So this text can not be clearly understood and used to build a machine.

A remote viewer (clairvoyant) Daz Smith has sketched in 1998 the interior of an artifical UFO. He had in front of himself only a closed envelope with a picture of "flying saucer"[1]. 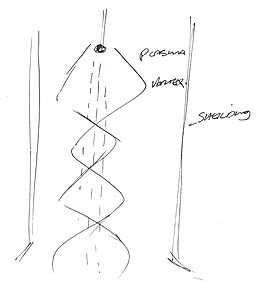 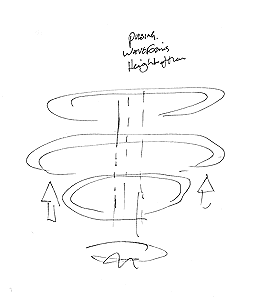 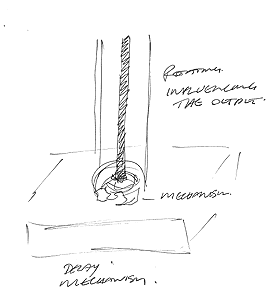 The "Plasma flows" depicted in the sketches are consistent with the principle of levitation (see "Life energy"). This remote viewer found nothing about the UFO pilots, and also he noted the similarity of his sketches with pictures of Bob Lazar, which he found later: 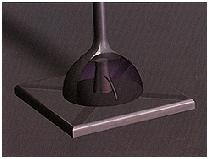 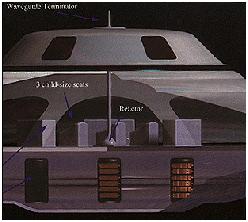 Bob Lazar (Robert Scott Lazar) calls himself a physicist who worked in 1988-1989 at the famous "Area 51" researching the UFOs of "aliens". The Internet story of Bob Lazar about UFO is a pseudoscientific nonsense. For example, he tell that a stable element 115 is the fuel for UFO. Really, the element 115 has been discovered in 2003 and the half-life of its most stable isotope is only 87 ms. Therefore it is absent in the nature.

Probably, such devices operate as the amplifiers of the natural ability to levitate, and they are controlled telepathically. This is shown in the 2nd episode of the television series "Taken" (year 2002), which tell the basic myths about aliens.

The Oceanic aborigines in the XIX century were faced with the higher culture than their own. The so-called "Cargo cult" was created after the observations of the cargo planes. The aborigines belive that these planes were created by the spirits of their ancestors, the gods who send gifts. Apparently, the similar things happened with the natives of the Ancient India and the Near East 5-6 thousands years ago, when Antarctica was frozen and the civilization had moved closer to the tropics.

Nibiru is a big vehicle of the Akkad-Babylonian gods, which moves back and forth in a certain cyclic manner. The citation from Enuma Elish: «After he had organized the year, he established the heavenly station of Ne-beru to fix the stars' intervals. That none should transgress or be slothful he fixed the heavenly stations of Enlil and Ea with it. Gates he opened on both sides…»

The name of Nibiru means a "cross” symbolizing the spokes of a chariot wheel. A cross and a circle are the religious symbols of the ancient Eurasian peoples.

Nibiru is depicted as a glowing ball or disc (Anu) with wings (Enlil and Ea) and with the crosses also. The Assirian god Ashur (Assur) and later the Persian Ahura-Mazda (Ohrmazd) are depicted inside the winged disc. The image of the winged disc came to the Egypt under the influence of the Near East. The divine vehicle in the Book of Ezekiel (Ch. 1) is also described by the wheels (disks), wings and the cruciform shapes.

According to a legend[1], the Egyptian god Horus established in Edfu (Behdet) a divine metal foundry, where the unique weapons were made of “divine iron”. And Horus also trained there an army of "mesniu" - "metal people" to fight against the army of Seth. They were depicted on the walls of the Hellenistic temple of Edfu as the men with the shaven heads, wearing a deep collar, and carrying the weapons in each hand. The depiction of an unidetified harpoonlike weapon was included in the hierogliphic words for “divine iron” and “metal people”. The legend tells about the winged disc as about the vehicle of gods exactly. The Egyptian winged disc with the two serpents was eventually converted into a double-headed eagle with his wings spread:

The one-headed version of eagle is also known in the Western Europe:

“Mu” (Akkadian), “shem” (Hebrew) is a word that is usually translated as a "name" or even omitted. In fact, this is a natural aetheric vortex (the aura) or an artifical vehicle. Sitchin[2] notes the inaccuracy of this translation and gives the examples: