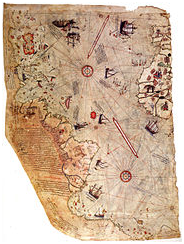 A Turkish saylor Piri Reis (Hacı Ahmed Muhiddin Piri) had created in 1513 the world map based on the ancient sources. A section of this map was found in 1929, and it shows a part of the mythical southern continent, which existence was suspected by many medieval geographers. According to the seismic scanning of Antarctica by the Swedish-British Antarctic Expedition in 1959, this part corresponds to Queen Maud Land without ice.

Map of Oronce Finé (left) and a modern map (right)

The Oronce Finé map of 1532 was preserved in the Library of Congress and published in 1960. This map shows Antarctica in detail, which was officially opened by Bellingshausen and Lazarev only three centuries later in 1820. Also the rivers are shown on the Antarctic shores, so they are not covered by ice. 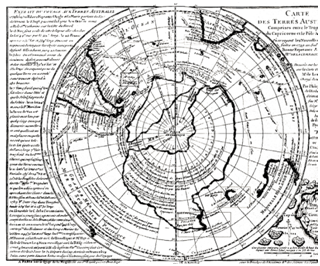 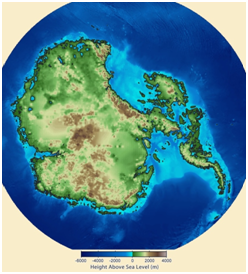 Modern model of Antarctica without ice

The Reichsminister of Aviation H. Göring sent in 1938 an expedition into Queen Maud Land, as the Norwegians named this land later. This expedition was associated with whaling, which Göring supposedly concerned as a Reichsminister of Economics temporarily. Although the whales could be found much closer to Germany. The 600 of 14,000 square kilometers of the Antarctic area (where no whales) were examined during the expedition, and 350 of them were shot by the aerial photography. The Ahnenerbe ("Ancestral Heritage") sent the expeditions into many points of the world to search information and artifacts. But Ahnenerbe does not officially have any relevance to Antarctica for some reason. Olaf Weizsäcker, a little-known representative of the Ahnenerbe in this expedition, had issued a secret book, which describes the ruins of a city with a temple reminiscent of the Aztec temple, and also a dead underground city with obelisks and "Sphinx"[1]. Germany pretended to be the owner of this land as New Swabia in 1939, and then Norway claimed it Queen Maud Land.

Antarctica was covered by ice and became uninhabitable for about 6 thousands years ago, as Dr. William D. Uri (Carnegie Institution) determined[1]. The civilizations of Mesoamerica, Near East and India along with almost all the well-known history had started approximately at this time.

According to the false Biblical chronology, the deluge had occured about 2-3 thousand years BC and a new period began. But the evidences of any global natural disasters, which had occurred at that time, do not exist.

Civilization of Near East knew the metallurgy and highly valued the non-ferrous metals for unknown reason: copper, silver, gold, etc. Only the silver has a useful property known since the ancient time: the bacteriostatic effect. The rapid development is associated with the Bronze Age, because the strong bronze tools had completely replaced the stone and wood tools.

All these civilizations were somehow connected to the reptiles:

All these civilizations arose near the ancient pyramids, and they also built their own pyramids. The small stepped pyramidal temples of Mesopotamia and Mesoamerica are surprisingly similar to each other:

The public events, in which the sacrifices were included sometimes, were carried out outside. The altar for priests and elite was at the top of this pyramid, and the place for the remaining people was at the foot of this pyramid.

The sacrifice to the gods is a mandatory part of the cult. The sacrifice is made by the herbs burning or the ritual killing of animals and even humans. The Judaism is descended from the Babylonian cults and also dictates the rituals of sacrifice.

The ancient civilizations had no any common language despite many cultural similarities. Their languages were not the members of a large family such as the Indo-European family, for example. This is a consequence of the principle "divide and rule". This was invented by the gods-creators of the world order long before the Romans, who just supported the existing order. This principle is shown in the biblical story of the Tower of Babel. The Hebrew word "shem" is translated not as the "name" in this case, but as the field produced by a large pyramid (see also "Tech of Gods, Ancient texts"). «And they said, Go to, let us build us a city and a tower, whose top may reach unto heaven; and let us make us a SHEM, lest we be scattered abroad upon the face of the whole earth» (Genesis 11:4).

The original writing systems were invented immediately despite the irregular languages. The writing and the calendar are used to make the chronicles and the similar documents on which the modern history is based. The peoples, who did not write the chronicles, and who have only the oral traditions are considered the primitive savages.

The philosophy of civilization is a principle of the unity and the struggle of opposites, which was formulated as early as in the ancient Greek philosophy. The parts of one harmonious entity can interact in some way. Choice of the way depends on the philosophy: