Peter Suffrid Leouardiel wrote in his I book «Origins of the Frisians»: «All historians of Britain have the common opinion that Brutus, who named Britain (called Albion before) as his own name, had expelled the giants called Slavs from this island» [1]. Brutus of Troy is the mythical first king of Britain. Since Troy and everything which goes with it is a myth (Trojan War, see "Greece"), then this Brutus could be only a contemporary of Julius Caesar: Decimus Brutus.

The Celtic cattlemans from Wales are named as the Slavonic god of cattle: Veles. They also call themselves and their land Cymru, which is derived from the name of Cimmerians, the Indo-European nomads, who came from the mainland. The neighbouring Celtic tribe of cattlemans has the Roman name Alba (white) and also the self-name "Scot" (“cattle” in Slavonic). Their land is called Scotland.

London (Latin: Londinium) is one of the oldest large Western European cities, which was founded by the Roman colonizers. Its name can mean the “lunar” (white) town. Now the territory of the ancient Londinium is the City of London, a microstate, which is similar to the Vatican.

Ambrosius Aurelianus is presumably the last Roman governor of Britain.

Rome had fell down in the V century. This allowed the colonial management to Byzantium and also provided the opportunities for Avar Khaganate (a residual of the Attila’s Empire).

Northumbria is the northern kingdom of Umbri (in Latin), or the Obrs (in Slavonic), or the Avars, who are also known in the Irish mythology as the Fir Bolg (Avar Bulgars). This kingdom quickly came under the Anglo-Saxon control and became the largest County of Yorkshire. York is one of the oldest English cities, which was founded on the site of a Roman fortress.

Tuatha Dé Danann is the Germanic tribe of Danes, who conquered the prehistoric Ireland.

The Saxons is a Germanic tribe, which is related to the Byzantine Empire. This name comes from the biblical Isaac. Isaac had to be killed by a knife (a seax is some old Germanic knife) and sacrificed.

The Angles are related directly to Byzantium. This name comes from the Greek "angelos" and means "messenger", "envoy", "angel". In the V-VI centuries, these messengers actively carried the Orthodox Christianity into Britain. The Germanic angles never existed. There also was the Byzantine imperial dynasty of Angelos.

The Anglo-Saxons (an inseparable pair of Saxons and Angles) conquered the southern Britain in the V-VI centuries and displaced the Britons into the continent, where they later founded the French Brittany. The Saxons were separated into Kent, the Southern Saxons (Sussex), the Eastern Saxons (Essex) and the main Western Saxons (Wessex), who created later the united England.

A.T. Fomenko and G.V. Nosovski has found a correllation between the sequences of the Byzantine emperors and the Anglo-Saxon kings before the Norman conquest [2]: 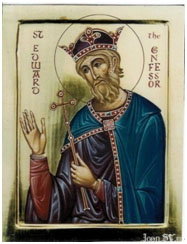 The whole history of the early medieval England (up to the XII century) is described in the "Anglo-Saxon Chronicle", which consists of several manuscripts dated from the XI-XII centuries. Some conclusions follow from the assumption that the early medieval England didn't have an exact chronology and the chronology of Scaliger-Petavius is incorrect:

A sheriff is an Anglo-Saxon authority. The etymology of this word is somehow derived from the old English word "shire" (county) and "reeve", which is rather known as a synonym of "to pass" than a "manager". The new chronology and the definition of "Angles" allow associating it with the Hebrew word "Seraph", which denotes the high angel in Christianity. Hence, the meanings of the single words “reeve” and “shire” are derived. The last is used in the historical county names: Yorkshire, Hampshire etc. The sheriffs was gone after the Norman Conquest, but they was revived in the USA, which were liberated from the British Crown.

William the Conqueror had started the Norman dynasty of the English kings in the XI century. This dynasty then was converted into the French (of Norman origin) Plantagenet dynasty, who ruled before the XVI century. The England became a Catholic country, and the Normans had built the fortress Tower in London to control the dissident Anglo-Saxons. The English monarch, despite all the reforms, still has the following formal rights:

The Anglo-Saxon legal system is a special system for the Christian world, which provides the common law. The laws are establishing by an independent court on the base of a judicial precedent. This was started since William the Conqueror with his itinerant courts.

Edward I Longshanks (XIII century) is a strengthener of the English power within England and the neighboring kingdoms. He annexed Wales to England. He established the Parliament, which is divided into the House of Lords and the House of Commons since the XIV century until now.

English language was formed by many mergers and conquests of the miscellaneous kingdoms. As a result, it is mixed from Celtic, Norse (Anglo-Saxon) and Roman (Latin) roots with the bizarre irrational pronunciation of them.

English people, obviously, interacted with the Jews for such a long time and acquired such strong opinion about them, so that the word “jew” as a verb also has the meaning: to bargain, to deceive.

The Church of England had been separated during the reformation from the Roman Church, which was banned completely. The Calvinism is a branch of the Protestantism, where the money and wealth are not associated with a sin.

English Calvinists are the Puritans followed by the Baptists. The Baptist Church is a group of the disparate communities, to which only the interested adults join. The priests at the head of communities have no any guidance and are free to preach anything. The activities of the most common US communities are the meetings on Sundays and listening to the concerts from various sermons, poems, music and songs. The modern American parishes become gradually closer to the entertainment places to not lose their visitors.

Mormons are the followers of Joseph Smith (1805-1844), who grew up in a family of the American Presbyterians (a branch of the Calvinists). The Mormon Doctrine is a personal view on the Christianity of Joseph Smith, who since his childhood had meetings with an angel Moronii and had learned his knowledge. The first Mormons were polygamists and had no the private property, which they gave to the Church in general use. Then these laws were banned, but the attendees still donate a tithe (10% of their income) to the Church as well as all the Protestants. The African Americans could not become the Mormons before 1978.

In Western Europe, including England, the medieval times of knights were changed to a new happy life of the pampered kings and noblemen, who forgot about the war and wished for luxury. The kings and the nobles began to gradually cede their power to the various merchants and moneylenders.

Oliver Cromwell (XVII century) defeated and robbed the king Charles I, dissolved temporarily the House of Lords, and appointed himself the Lord Protector. Since that time, the English monarchy became constitutional and gradually lost its authoritarian power. The Jews, who were expelled by Edward I, came back into the England, and the freedom of entrepreneurship was declared. The medieval Templars were already gone in those days, and the rich Jews were the only creditors.

The British Navy was always one of the strongest thanks to its Norman origin and the location of Britain on an island. Queen Elizabeth I had successfully used a private fleet (Privateers) in dealing with her competitors (Invincible Armada). The successful British colonization of the world happened thanks to the Navy also.

The British Empire (XVI-XX centuries) is the world's largest empire, thanks to which the English has become a language of the international communication. After the Cromwell’s dictatorship, the private Bank of England funded the impoverished British government, which returned the credits at the expense of taxpayers and the British colonies. Since this time, the active world colonization by the Anglo-Saxons, who were armed with guns, started:

Nathan Rothschild in 1815 had sold the British government bonds on the stock exchange. So he, as a famous financier, started a rumor about the British defeat in the Battle of Waterloo. Then the punters had started to sell their bonds for the low prices, but on the same day, the British victory in this battle became known, these bonds immediately rose in price, and the most of buyers were the Rothschild’s agents. This victory happened due to the suddenly missing marshal Grouchy. Many nobles became poor on this day, but the Rothschilds soon had bought the noble titles and the places in the British Parliament.

B'nai B'rith (Sons of the Covenant) is the Jewish Masonic Lodge, which is associated with the Rothschilds and founded in 1843 [1].

The Victorian era is the second half of XIX century, the Golden age of the British Empire achieved thanks to its robbed colonies.

Dollar (English name of a silver coin Thaler) is a currency of the former British colonies. The dollar is not tied to the British pound sterling (silver coin), which was the world's reserve currency freely converted into the gold before 1914. The dollars are not initially provided by any natural values, and the discount rate of the emitting banks causes a permanent increase in the money supply. This provides the slow but permanent inflation, which enriches only the bankers. To fill the dollar by a value, the large quantities of the value should be obtained. Since the whole world in the XX century was already occupied by someone, it was necessary to make wars with other empires or to make the revolts inside them.

The World War I is a war of the strong empires with a “weak link”, which were the fading Ottoman Empire and the German "Empire" allied with a "patchwork" of Austria-Hungary. The result could be predicted: the Germany suffered a catastrophic defeat, and the exhausted Russia got a revolutionary situation, which grew into a disaster too.

According to a historian N. Starikov, the Russian revolution happened with the Anglo-Saxon participation. It can be noted additionally, that the symbol of this revolution was red, and the meaning of name Rothschild is the "red shield" (German: roten Schild). It should be noted also a similarity of the symbols and the slogans:

The National-socialist Germany was funded from the US. The Nazi symbolism is also full of red.

According to a historian N. Starikov, Britain encouraged Hitler to attack the USSR [3]. In 1940, Britain and France were ready to attack the USSR, rather to bomb the Caucasian oil fields, but Hitler broke their plans[4], because the USSR supplied him with the raw materials. Immediately after the Hitler's decision to attack the USSR in 1941, Rudolf Hess (Hitler's deputy) held an informal visit to Britain. Many details of his visit are carefully hidden by the British government before 2017, and also the subsequent events of his life were mysterious:

After the victory over Hitler in 1945, the Britain and the USA were ready for the so called operation "Unthinkable": a real war against the USSR. As it is known, this war was left in the "cold" stage, and the British Empire soon had disintegrated, so the world became bipolar.

The British foreign intelligence service MI-6 existed since 1909, but it is so secret that even its existence was confirmed only in 1994 after the final collapse of the USSR. Obviously, the British government keeps many secrets of the XX century.