«The second message was transmitted by COD in 711 A.D. to the inhabitants of the city of Tqaatzetcoatl,
then the largest on the American continent»

The cult of a single god creator Viracocha was born in the region of Peru and Bolivia at the period 1400-400 years BC, which overlaps the period of the New Kingdom of Egypt. This cult has grown up to the Inca civilization by the XII century.

One of the first known images of Viracocha is the Raimondi Stela made of granite. This stela was found in the temple of Chavin de Huantar built in the I millennium BC. The later Viracocha facical image resembles a distorted disk of Aten with its rays. Viracocha holds in his hands something like the rod and the whip of a pharaoh. The hymns were also dedicated to the Viracocha as to the Aten. 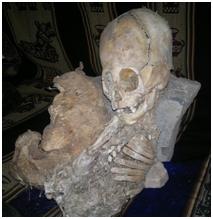 The mummy from Peru

Some of the Egyptian mummies, which are aged about 3 thousands years, contain nicotine and cocaine as well as these Peruvian mummies [1]. Tobacco and coca became widely known in Eurasia only after the Late Middle Ages. Nicotine can be found also in some other plants than tobacco, but cocaine is found only in coca, which grows in South America. Thus, the Ancient Egypt had contacts with South America, which explains the emergence of Viracocha.

Thor Heyerdahl showed that a papyrus boat can cross the Atlantic Ocean. He arrived from Morocco into Barbados after 2 months by a papyrus boat. As if the Indians lived in a desert but not in the jungles, and they could not make the usual wooden boats. Obviously, they have learned the shipbuilding from the ancient Egyptians. 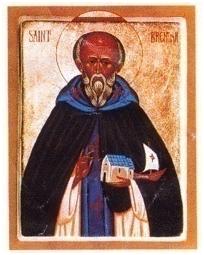 The colonization of Britain by Byzantium had caused a sustained interest of the Europeans to the western overseas lands. A patron saint of the modern US Navy considered the orthodox Saint Brendan (V-VI centuries), who discovered the Saint Brendan's Island.

The Scandinavian Vikings, as it became known recently, visited Iceland, Greenland and Americas long before Columbus not later than the XI century, when the Catholicism became powerful in Scandinavia. Vinland (grape country) is a Scandinavian name of a North American coast, which was mentioned in the "Greenland saga" and in the sagas on "Erik the Red".

A stone at Brighton Beach

The Toltecs is a people of the Aztec language group, who intruded into the northern Mexico land in the VIII century, brought there the cult of Quetzalcoatl (a feathered serpent), and founded the city of Tula (Tollan). The legend about the island of Thule, which is located somewhere to the north-west from Britain, is known since the ancient times. Perhaps, the Vikings, who were inspired by this legend, came to North America and had created a culture of Toltecs, which subsequently grew into the culture of Aztecs. The images of the pale bearded gods were found recently at Brighton Beach on some stone fragments, which are now used as the breakwaters [2].

The Aztecs, who called themselves "meshika" (Mexicans), is a European name of the inhabitants of the Mexican cities of Tenochtitlan and Tlatelolco, who allegedly came from a certain island of Aztlan at the north. Probably, “Aztlan” is the "Iceland" in the aboriginal pronunciation. According to a legend, Quetzalcoatl in a shape of the pale-faced bearded god inspired the Aztecs to move from Aztlan into Mexico, where they had established their empire. Aztecs featured the most mass human sacrifices.

Perhaps, the warlike Toltecs and Aztecs helped the Europeans to prepare for the future colonization of Americas. The Aztecs sacrificed the healthy soldiers, so the gene pool of tribes was corrupted. Then a conquest of the Aztecs would be sufficient. The Portuguese had done this in the XVI century.

Within a few centuries since the XI century, the European shipbuilding quickly evolved from the small Viking boats (similar to the Egyptian boats) to the large multi-decked multiple-masted Portuguese caravels. The sailing shipbuilding was developed by the Dutches (relatives of the Normans). The deep draft, the good stability of ships and refusing of the sculling are obviously the features for an ocean but not for a shoreline. The rapid development of the sea navigation can be explained by the necessity to travel across the Atlantic Ocean. The Anglo-Saxons, the kings of which were the Normans, became later the most successful colonizers of North America.

Normans (Vikings) in the XI century became so powerful, that they conquered the neighboring lands and founded there the royal dynasties. Тhey conquered the southern Britain and the northern France (Normandy) by the XII century. The lions or leopards (the Aztec jaguars), which do not inhabit the northern Europe, are depicted on the Normanic coats of arms. The main royal houses, which created the royal dynasties of almost whole Europe, were near Denmark.

The Ynglings is an ancient Scandinavian (Norman) royal dynasty. The «Ynglinga saga» dates to the XIII century.

The Incas are the rulers of the multinational empire in Peru and Bolivia, which emerged around the XII century. The relationships between Vikings and Inca are not clearly proven. It is said that the Incas did not use any developed writing system, although they had the developed emprire (?). There are only few indirect proofs of these relationships:

The Inca civilization had the features, which are different from other American civilizations:

The Knights Templar or the «Poor Fellow-Soldiers of Christ and of the Temple of Solomon» is one of the richest and most mysterious organizations of the medieval Europe. According to a legend, the first "poor knights" had only one horse for two men. The Roman church allowed existence of this Order of the Temple, which was not controlled by any government, at the XII-XIV centuries. The initial and final location of this Order was Portugal. It was a contemporary of the Spanish Kabbalists and a predecessor of the Rosicrucians and Freemasons. It was not a "transparent" organization before the times of Inquisition and persecution of Jews. The secrets of the Knights Templar are gone along with them or became the secrets of other organizations. However, the following is known about this Order:

In 1988, the Australian archaeologists have found at Easter Island a medieval knight, who was conserved in a peat swamp [2]. The coins of the XIV century were found in his pocket, and therefore he was attributed to the Livonian Order, a probable heir of Order of the Temple. The knights of both Orders have the same distinguishing feature: a white gown with a red cross. According to Thor Heyerdahl, the medieval culture of Easter Island refers to the culture of Incas.

Polynesia is a group of islands, including the Easter Island, which are scattered over the Pacific Ocean. These islands are united by a single people, who wandered over the ocean during the period from X to XIV centuries. It is believed that the Polynesians discovered these islands, crossing the open ocean in the canoes and catamarans. Also surprisingly many people with the European facial features could be found among the indigenous Polynesians, who are surrounded by the Indian and Asian people:

The listed facts allow a link between the Knights Templar, the Normans and the Incas, as the French historian Jacques de Mahieu links them. Perhaps, the Templars had created the Inca civilization of an European type, which served for the extraction of gold and silver. 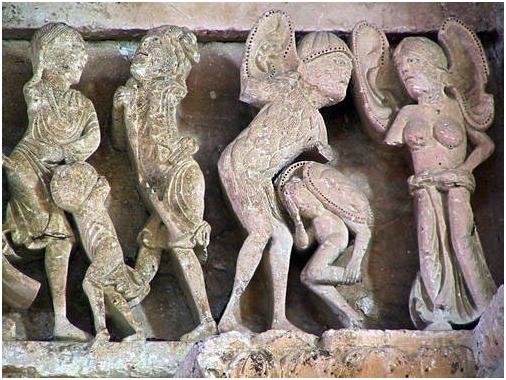 A fragment of the pediment of Cathedral of the Templars in Vezelay (Burgundy).

According to J. Mayo, a North American aborigine with the feathers on his head is depicted on the left side of a fragment of the pediment of Cathedral of the Templars in Vezelay. The Panotti (people with the big ears) are shown on the right side of this fragment. The ancient scholars believed that they inhabit the northern Europe, in particular the Orkney islands near Scotland. The big ears may be associated with the earrings, which the Scandinavians wore. Also the Easter Island was inhabited by some "long-eared" tribe, who created the famous moai statues.

Normandy and its surroundings is a medieval "Promised Land", which was created by the Knights Templar and the Normans. There are some toponyms of biblical origin, which bind the Roman Gaul with the evangelical Galilee:

The Notre Dame is a cathedral in the central Paris, which was built in the times of Templars. Its prerevolutionary facade was decorated with the Gallery of Kings: 28 kings of the ancient Judea.

Coat of arms of Paris

The Paris was founded by the Pharisees yet in the era of Rome-Israel, and it was previously called Lutetia, i.e. a Slavonic town of the Lutici. The coat of arms of Paris depicts a Viking boat, to which the city apparently owes its formation.

Order of the Temple in Portugal was necessary to fight against the Moors, and therefore it was not affected by the Inquisition. It was named officially the Order of Christ and was managed by a local king. Columbus officially discovered America, and the conquistadors used the well-developed technique of the long-range sea navigation: the comfortable heavy caravels, which had the sails with the red crosses of Templars. The Portuguese and Spanish colonies were located on the sites of the successful colonies of the Vikings and the Knights Templar: Mexico and South America.

See also The Vedas of the universe and heritage of the ancestors of humanity.

The Ynglism is the so-called "Ancient Russian Ynglist Church", but most likely a "new Russian", which has adopted an information from the Western sources. For example, it is doubtful that the "Santee Vedas Perun" relate personally to the Slavians, as it's evidenced by the following facts:

The "Santee Vedas Perun" contains the prophecies for the period about 40 thousands years! This is absolutely unreal period, which brings the fatalism into the life and deprives it of meaning and choice.

The racist and anti-Semitic "Santee Vedas Perun" resemble the Nazi mystical ideology. The propaganda in the style of Goebbels (“The bigger the lie, the more it will be believed”) is adapted for the Russians by the Alexander Hinevich. The education of Hinevich is some vocational school (Russian: PTU), and the target audience of his information products is appropriate. His relatives are living in Israel [4], and he was actively engaged in religion after a trip into USA [5].

The names of eight of the nine months of the so-called “da’aryan” calendar clearly correspond to the letters of Hebrew in order and sound: Aylet (Aleph), Beylet (Beth), Geylet (Gimel), Daylet (Daleth), Eylet (He), Veylet (Waw), Heylet (Heth), Taylet (Teth). The month "Ramhat" is similar to the Muslim Ramadan by its name, its time, and its meaning.

The so-called “h'aryan” writing presented in the book[3] is decoded easily by comparing of the original text and the translated text, and it has an interesting feature: the numbers are written as the letters, which is a feature of only the Semitic, Caucasian, Greek, Roman and Church-Slavonic numeral systems. The H'aryan letters are arranged in the ascending order of their values like the Cyrillic alphabet, which is similar to the Greek and the related alphabets. This alphabetic order has nothing to do with the Futhark and the Indian Devanagari, which are allegedly originated from the "h'aryan" alphabet. The Devanagari is also the least similar to the "h'aryan" alphabet. It seems that the "h'aryan" alphabet was invented as a simple cipher of the Cyrillic alphabet not so long ago.

The information and terminology of "The Book of Light" partly coincides with the legends of Knights Templar Russian, in particular "About the Ancient Egypt"[4]. These legends also tell on Elohims and Jehovah, which are not included in the "Slavic-Aryan Vedas" for the obvious reasons.

Order of the Knights Templar became known in the USSR since the 1920s and suffered of the Stalinist repressions[5]. The return of the Templar legends in the 1990s as the Ynglism may be explained by the Perestroika and the "De-Stalinization". The Ynglings community with a strict hierarchy is also called the Order, and some priests are called the “Templars” (Russian: khramovniki).