The flight is an universal and comprehensive way to travel in a space. The underwater motion is a flying in the water.

A solid body, which movies at a sufficiently high speed, within a motionless viscous gaseous or liquid medium produces a so-called Kármán vortex street.

Each vortex has the energy and inertia, and it may be either an obstacle or a support. Therefore, the best way to fly (to swim) of a long dense body is a wavelike serpentine motion. 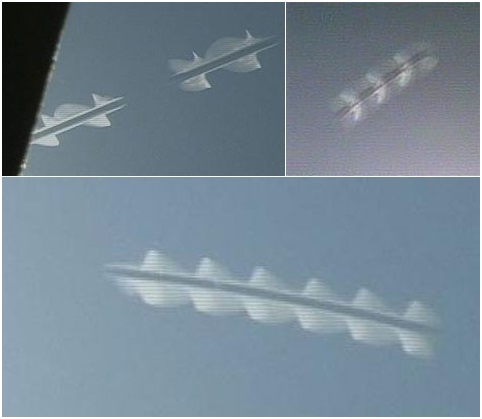 The aetheric life forms can fly very fast in a form of the “skyfish”.

The similar motion is observed for various organic animals:

The migratory birds in a flight are arranged in the V formation, which rises from its head to its tail. The weak trailing birds are using the wingtip vortices (vortical flows), which are produced by the strong leading birds.

The heavy beetles (scarabs, cockchafers, flower chafers), as well as bumblebees, with the disproportionately small wings can fly slowly and steadily despite the aerodynamics laws.

The scarab beetles flap their fragile wings much slower than other heavy beetles, as Grebennikov noticed. Their wings are also protected by the durable elytra against the microstructure damage. Probably, this microstructure supports the Grebennikov’s CSE, which produces the more powerful aetheric vortices in addition to the air vortices. The ancient Egyptians portrayed the sacred scarab on the "winged sun" (see «Tech of Gods»).

The aetheric vortex is a fundamental universal mean of flight. The levitation of the Indian yogis is based on the aetheric vortices (see "Life energy").

Everything is useful in the live nature, and a natural flight utilizes the vortices. But the traditional flying vehicles are based on the unnatural principles, and any vortices are harmful for them. For example, the birds will never stall or ”spin" due to a transition from the laminar flow to the turbulent flow above the wing.