The sphere is the main geometric object.

The next main objects are the only five possible convex regular polyhedrons or the Platonic solids:

The listed polyhedrons have the equal edges and faces. Their vertices are distributed uniformly on a circumscribed sphere.

The Platonic solids with the same number of edges are called dual or reciprocal. If one is put symmetrically inside the other, the vertices of one correspond to the faces of the other. 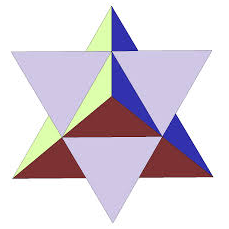 The tetrahedron is self-dual. Two dual tetrahedrons circumscribed into the same sphere are producing a symmetrical object called the stellated octahedron (stella octangula), which consists of the central octahedron and the adjacent tetrahedrons (eight rays of a star).

The icosahedron consists of 20 tetrahedrons with 13 shared vertices. The icosahedron edges are producing 12 intersecting planes in a shape of the regular pentagons.