The cores of stars and planets are the electrically conductive mediums: the stellar plasma and the planetary electrolyte. Such core contains several liquid and aetheric annular vortices. The axis of the main self-sustaining powerful vortex is almost collinear with the rotation axis of star or planet, directing the magnetic field of a cosmic body. The vortex configuration depends not only on the direction of own rotation of planets or stars, but also on the periodical processes. The Sun's magnetic field shifts its polarity every 22 years. There is a theory that Earth's magnetic field shifts its polarity each half-period of the planet precession, which is about 12-13 thousand years.

N.A. Kozyrev proved [1] that the fusion energy is not the only stellar energy source, and he pointed to an unknown source. The aetheric vortex makes a star-plasmoid, which consumes an aetheric energy. The Sun's corona is more warm than the Sun's surface, because the vortices decrease the temperature within their centers.

All the planets of Solar System emit more heat than they receive from Sun. The planetary core contains many small aetheric vortices, which are permanently arising and decaying. So this is some source of the planetary thermal energy. Examples:

A white dwarf is a simple plasmoid without a fusion. It cannot cool off and become a black dwarf, while it consumes an aetheric energy.

A neutron star or a black hole is an aetheric macrovortex of high energy, a significant part of mass of which is "dark matter". A substance there has the usual form, but not neutron, etc.

A pulsar is a neutron star, in which the rotating particle bunches emit the synchrotron radiation. The plasma particles are intensively emitted through the star poles, where the electrostatic (or Lorentz) forces are weak.

The flows of the aetheric vortices, which are emitted by stars and planets, produce various anomalies. On Earth, such places are spread over the crustal faults, etc.

The stars and planets are the complicated objects-monads, the poles of which are at the regular polyhedra vertices. Their magnetosphere has a corresponding configuration.

The Sun has a monad in a shape of octahedron, so its magnetosphere has four equatorial poles. Four streams of the solar substance, of which the planets of Solar system are built, are twisted into the spirals, which are shown by the ancient Aryans as the swastika, a solar symbol. 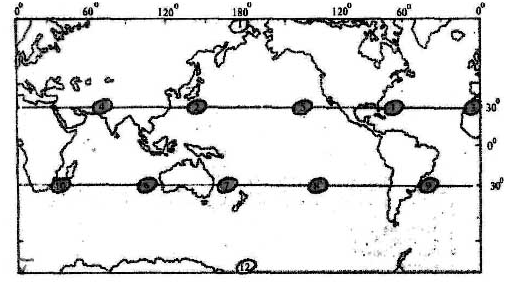 Earth's anomalous zones are located at the uniformly spaced points, the vertices of icosahedron, which is inscribed into Earth’s sphere. In the oceans, which are located at these points, the aetheric vortices involve the large water masses, which increase the anomalies. The most famous points are: Bermuda Triangle and "Devil's Sea" near Japan. The less known other anomalous zones are: Hawaiian (giant waves, which arise without any winds and currents) and Afghanistan (seen UFOs). The fifth anomaly at latitude 30°N should be located in the western sparsely populated Sahara.

The pyramids, which are built in the anomalous zones, also amplify the anomalies. Examples: Mount Kailash, Bermuda Triangle. 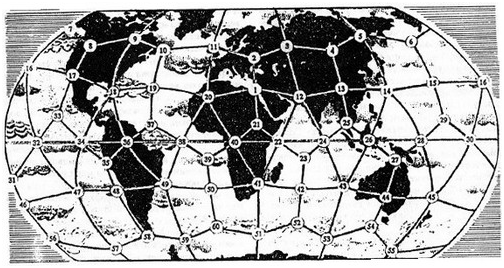 The Soviet engineers V. Makarov, V. Morozov and a painter N. Goncharov had complemented this icosahedron by its dual dodecahedron and got the icosahedron-dodecahedron Earth’s structure (IDES). The intersection points of these icosahedron and dodecahedron are the most suitable places for the life development. The ancient civilizations were originated (see "Pyramids") in such places at latitude 30⁰N. Stonehenge and Arkaim (see "Aryans") were built in such places at latitude 50⁰N.

A scientist Ernst Hartman believed that Earth is covered by a network of the energy meridians and parallels, which are oriented along Earth's magnetic field. The energy and information are propagated along them. This has been shown by the experiments with Tesla’s Wardenclyffe Tower, a giant Tesla coil, which binds Earth with its ionosphere, and it is synchronized with a generator of seismic vibrations. This tower has become an energy transmitter and the opposite point, where the corresponding energetic meridian and parallel are intersecting, has become a resonant receiver, which is located in the Tunguska region.

It is widely known that the tower was abandoned in 1905, but it was patented only in 1914 and destroyed by someone for some unknown reasons only in 1917. But V. Elenkovich, director of Tesla's museum in Serbia, stated that Tesla still experimented with this tower in 1908 [2]. The resulting effects could led to the subsequent classification of these experiments. Within a few days before and after the event, the people in Europe and southern Russia (along the energetic parallel) observed the glowing night sky and even the northern lights at the middle Volga. During three days before this event, the German University of Kiel (54⁰ N, 10⁰ E) observed the periodic oscillations of the terrestrial magnetic field of unknown nature, which were stopped immediately after the event. The meteor or comet version of this disaster is not proven.