The space is the infinite set of points, for which determined a distance between them (the metric). The infinity of this set does not mean that it’s unbounded. The objects are moving in a space from the points of theirs locations to the nearest neighboring points.

The line (straight line) is the only shortest path between two points, which passes through all the intermediate nearest points belonging to that line.

The angle (plane angle) is an expression of the relative position of two lines, which are intersected at the angle vertex. The angle value has different definitions:

The traditional angular measure is derived from the ancient Babylonian 60-base arithmetic and from the ancient calendar, where were 360 major days. The round astronomical (astrological) map of the celestial sphere, in which the sun makes a complete turn in a year, was divided into 360 degrees, which are then divided into 60 minutes and seconds. Then the scientific radian measure was invented, however, it does not get rid of the complicated trigonometry calculations. And recently, in the complex and matrix methods, the angular measures were directly substituted by the sine and cosine values, which simplify the trigonometric calculations.

The triangle is a triplet of points-vertices, which do not lie on the same line, and lie on an imaginary plane. The expression of sides \(a, b, c\) and their respective opposite angles \(\alpha,\beta,\gamma\), as a complex numbers in this plane, gives the following representation of the known triangle properties:

The perpendicular lines are two lines, which are intersected at the point A, and have a property: Any pair of points on the different lines always makes a right triangle with the right angle at the point A.

The integer dimensionality of a space is a maximum number of the orthogonal (perpendicular to each other) lines, which are intersected at any point of this space. The strict properties of the perpendicular and parallel lines are valid only for the ideal space of an integer dimensionality (Euclidian, Hilbert). A point is 0D-space, a line is 1D-space, and a plane is 2D-space.

The surface of an object is the object of lower dimensionality, which bounds the volume of the given object.

The hypercube is a complex object of an integer dimensionality, which is constructed from the equal orthogonal line segments and is circumscribed into a hypersphere. A cube is 3D-hypercube, a square is 2D-hypercube, and a line segment is a degenerate 1D-hypercube.

The volume of an object is a number of the non-overlapping base objects of a unit volume of dimensionality \(N\), which completely fill this object of dimensionality \(N\). A length is 1D-volume, and the area is 2D-volume. Traditionally, the base object is a hypercube. The choice of a base object reflects on the values of object volumes, but not on their ratios. The volume is a function of the dimensionality \(N\) and the size \(R\) with a geometrical factor \(C(N)\), which depends on the choice of a base object: \[V_N(R)=C(N)R^N\] The geometry is "surveying" in the ancient Greek language. The land pieces are usually rectangular, and their area is convenient to measure in the square units, which were entered into the foundations of mathematics and physics. In fact, the rectangular objects are rare in nature, as opposed to the circular objects. When replacing the square and cube units to the "circular" and "spherical", a hypersphere volume of diameter \(D\) becomes \(V_N=D^N\).

The real dimensionality is a value \(N\) in the ratio of volumes \(V_N\) of two similar objects with sizes \(R\) and \(R_0\): \[\frac{V_N(R)}{V_N(R_0)}=\left(\frac{R}{R_0}\right)^N\] \[N=\frac{\ln V_N(R)-\ln V_N(R_0)}{\ln R-\ln R_0}\] The fractional exponents were not easily accepted, because an irrational exponent has no the arithmetical definition. Also, the fractional spatial dimensionality is waiting to be accepted. Every actual physical value is continuous. The discretization is a product of human mind, who name the positive integers natural (from nature).

The self-similarity of space is the law of the spatial geometry of arbitrary dimensionality. The space is scalable and the set of all similar objects (subspaces) is infinite.

The fractal is a geometric object with some self-similarity. It is constructed by dividing the original object into the proportional parts and by its repetition within these parts recursively. For example, a construction of the orthogonal straight line segments by a fractal principle creates a grid of 2D-space with an infinite number of parallel-perpendicular lines: 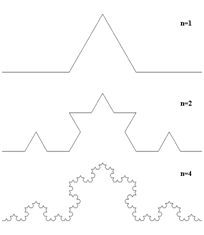 The infinitely divisible and folding curve does not approach to a solid 2D-surface, but it increases in its length infinitely, which implies the emergence of a new dimension. More close points are surrounding the object in this space, and the object has more alternatives to move than in the straight 1D-space.

The Dragon curve is another example of a fractal polygonal chain. Each segment is folded in half at the right angles, reducing by a half. It seems that the curve dimensionality should be 1, but the right angles and twisting cause the connection of segments to a grid of the orthogonal lines. This grid approaches to a sold 2D-surface although irregular. The homogeneous space is a space, which have the same dimensionality for each point. The actual physical space is heterogeneous.

The universe has an average dimensionality of 3 or more, but not less, because the matter becomes unstable. A significant deviation from this value is incompatible with an organic life.

The actual physical coordinates are the distances from a given point A to the \(M\) reference points within a space of dimensionality \(N < M\). This positioning method is known as the trilateration. It is used in the surveying and in the radio navigation (GPS, GLONASS). Any other coordinate system is not absolute and is derived. The point A is an intersection of M hypersperes. Here’s an example for 2D-space: 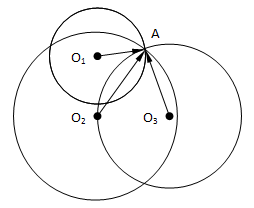 The actual coordinates of an integer-dimensional space are dependent on each other, that is, in this example, two circles have two points of intersection, and the third has to intersect one of them, having only two permissible radii. If the spatial dimensionality \(2 < N < 3\), than an intersection of two circles contains more than two points, and the third circle has more permissible radii, defining the coordinates exactly. Every coordinate-vector operation can be done by the solution of triangles system. The linear algebra is useless in case of the fractional spatial dimensionality.

Another example of 1D-space:

The right figure shows a known method to build a perpendicular, which exists only in the 2D-space and more. At a dimensionality \(1\leq N<2\), two hyperspheres can have only one point of intersection A.

The physical space has the absolute reference frame, with respect to which the absolute linear velocities of all objects are defined.

Units of area and volume

The ellipsoid volume in the hyperspheric units is the product of its diameters.

The following corrections are necessary for a multiple integral in the hyperspheric units: