«…the gravitational constant varies perceptibly even within your Solar system, let alone on larger scales, which has caused grave errors in your calculations of the dimensions of your Galaxy and of the distance to other galaxies, and it has also resulted in the emergence of fallacious theories of the closed Universe, as well as the recent theory of the dispersing Universe» 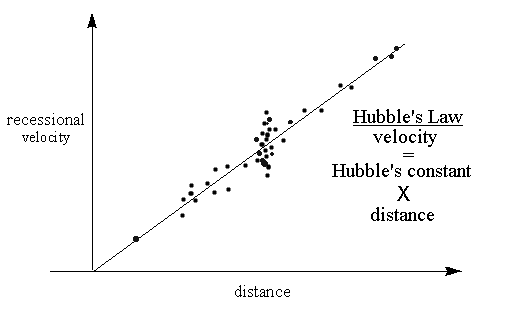 For separate galaxies this shift is determined by the linear Hubble’s law. Cluster Virgo, shown in the center of diagram, is included in the Local Group. The closely spaced galaxies affect by their fields at each other, and their shift is different from the Hubble’s law.

Hubble determined the distances to other galaxies by their luminosity, so the observational error of both the distance and the gravitational parameter has the same power function. Therefore, Hubble’s law is linear.

If the Universe is expanding, why our Galaxy is in its center?

The Big Bang never existed. The dark energy does not exist.