The ancient Slavian ancestors were the nomadic tribes, who settled in the area from the Baltic Sea to the Black Sea. They took part in spreading of the Indo-European language over Eurasia. The Slovenes (Slavians, Slavs) are a people of the 'word' (Russian: “slovo”). The Slavonic writing system was formed very late under the neighboring peoples influence. The Slavians came to Western Europe at the late II millennium BC. The ancient Greeks knew them as the Scythians, and the Romans knew them as the Etruscans. An Italian historian of the Croatian origin Mavro Orbini, who read the medieval books, believed that whole the ancient Europe was populated by the Slavians[1]. 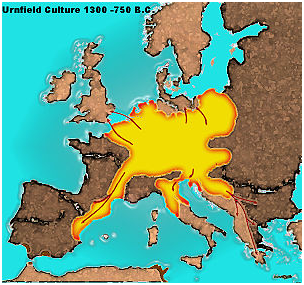 Map of the Urnfield culture 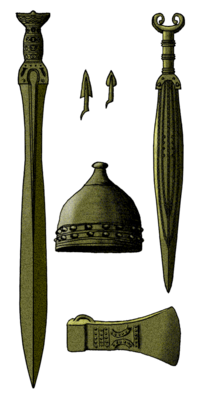 Objects of the Urnfield culture

First massive settlements of the Western Slavians correspond to the Urnfield archaeological culture of the Iron Age. The dead were cremated by the Aryan traditions, and their ashes were placed into the urns. The tribes settled along the river valleys, which were the affordable means of transportation and the food source. The supposed prehistoric tribes settlement within the Western Europe was the following:

When the Rome arose, and the Celts and Germans were strengthened at the middle of I millennium BC, the Western Slavians were driven into the area of present-day Poland, Czech Republic and East Germany, representing the Lusatian archaeological culture, which is a part of the Urnfield culture.

The Thracians are the Slavians, who lived mainly within the modern Bulgaria area. Thrace became a Roman colony and the Thracian language was influenced by Latin, so the linguists consider it similar to the Latvian. Phrygians are Thracians of Asia Minor. A Greek poet Xenophanes describes the Thracians appearance: «...Men make gods in their own image; those of the Ethiopians are black and snub-nosed, those of the Thracians have blue eyes and blond/red hair».

Veneti is a people, who, according to an Etruscan legend, was ruled by Aeneas and had came at the antiquity dawn from Asia Minor into the present-day Italy, particularly into Veneto. Also the name of Russia in the modern Finnish is Venäjä.

Names of the rivers Don, Dnieper, Dniester and Danube are derived from the same Slavonic root “dno” ("bottom" in English), relating in this case to a valley and a river watercourse. The Southern Slavians settled beside these rivers and had formed the medieval Kievan Rus’ (Rus’ Khaganate).

The Pomors is a common name of the Northern Slavians, who were also called the Fomorians in the Irish mythology. Pomerania (Polish: Pomorze, German: Pommern) is the present-day Polish and German part of the Pomors' land. Name of this people and their land comes from the word "sea" (Polish: morze, German: Meer). The former Prussia (German: Preußen) is located on the former Pomors land, and this is the land of Prussians, who live "beside russians". The following rivers flow in the former Pomors land: Saale (Slavonic: Sala), Trave (Slavonic: Travena means “grass”), Warnow (Slavonic: Voroni means “crows”). The Russian Pomors are now concentrated in the Arkhangelsk region, from which, for example, M. Lomonosov is originated.

The Krivichs (literally “curved”) are the "kinky" speaking latinized Baltic Slavians. The present-day Latvians and Lithuanians are a mix of the North-Western Slavians and the Finno-Ugric people (Sami). Latvians are calling the Russians "krievs" in turn.

The Polans is a tribe, which name is derived from the old Slavonic "polon" (English: "prison"). This was a name of the present-day Poles (the western Polans captured by Romans), and the eastern Polans of the Rus’ Khaganate.

The Serbs (from Latin "servus": a servant, a slave) are the Lusatian Slavians, who lived within the Roman colonies of Balkans and within the present-day Eastern Germany. The German placename "Zerbst" means Serbian.

Generally, the Slavians were perceived by Rome as the slaves. The Arabic slavers called the Eastern European people as “saqaliba”, “saqlab”. Hence the similarity of words "slave" and "Slav/Slavian" in Latin and other Western non-Slavic languages arose:

The Celts, Gauls (from the Greek "gala": milk) is a common Greek-Roman name of the white-skinned barbarians, who were neither Slavians nor Germans (Goths). In the ancient times, the celts lived in almost all the lands to the west of the Slavonic and Germanic lands. After many wars with each other and with the Rome, the Celts made up the provincial population of the Roman Empire. The ancient Celts were featured by a red hair, which is an admixture of the Neanderthals. Some modern descendants of the ancient Celts are the Irish and Scots.

The Druids ("TRee WIzarDS") are the Celtic priests, due to which the English word "true” resembles the "tree”. The tree was sacred for many ancient peoples, in particular for the Jews (tree of the knowledge). The divination and prediction, using the unique horoscope, is a typical Near Eastern tradition also. Thr Milesians (Goidels) are the last mythical rulers of Ireland, who came from Egypt through Crete (Greece), Sicily and Spain, and who are apparently the Jews. The Celtic late autumn festivals have the Jewish roots really:

The Boii are the eastern Celts or the western Slavians, the "fighters" (Slavonic “boj” means fight) against the Romans. Bohemia (Latin: Boiohaemum) is the Boii native land, where is the Czech Republic now. Bavaria is a former joint land of the Boii and the Avars.

The Lombards (Langobards) are the "long-bearded" fighters against the Romans. The beard is a typical feature of the white race.

Thr Germans (Goths) is a nation, which is mixed of the Celtic and Slavonic tribes. Therefore, the ancient Germans were both red-haired and fair-haired. The Germans were formed for centuries under the Roman influence as a population of the empire (Reich), which is headed by a king (Rex, -reh, -rih).

The Gothic Bible is one of the world's oldest Bible translations from Greek, and this is a Gothic literary language carrier.

The Semitic borrowings in the basic dictionary shows the Germans' role within the Roman Empire (to be poor, to hunt, to break foreign, and to build own):

The soldier is a German word of the Latin origin from the name of a coin Solidus (Soldo) or a salt, which were paid to the Roman warriors. So the purely German verb "sollen" (shall) came.

The machine (German: Maschine) and mechanics (German: Mechanik) is the words, which are derived from the Indo-European root "M-H/G", which denotes the might and magic. The mechanics and the mechanical engineering (German: Maschinenbau) is a foundation of the German and the whole Western philosophy. The wheel is a fundamental mechanism (see «Aryans»).

The historic German center is the Rhine sources near Swabia and the present-day Switzerland near the Ancient Rome. The prehistoric Germans went down the Rhine, had displaced the Rani (Rujani) to the east, had crossed the sea, and had reached the Scandinavian Peninsula, populating it by the ancestors of the warlike Vikings and Normans in addition to the Sami (Finno-Ugric) people. The names Switzerland, Swabia, Sweden and Suebi (Suevi) are derived from the same root. The Roman colonizers had founded 2 thousand years ago the cities on the Rhine and its tributaries: Trier, Cologne (colony), Nijmegen, etc.

Sweden is a center of the "non-Aryan" haplogroup I-M170, which is a feature of the Southern Slavians also, especially the Croats. This haplogroup correlates to the Near Eastern haplogroup J-P209 and confirms the southern origin of the ancient Germans and Swedes. The soft 'R' of the French and the Germanic peoples is a Jewish feature.

The Teutons (Latin: teutoni) are the medieval colonizers of the Eastern Europe. Their name comes from the Greek "tauto" ("the same”). The Teutons were the same as the Romans, and they were creating the Holy Roman Empire.

Brandenburg is a place of the medieval combat (Western Slavonic “branit/bronic” means “to defend”, Slavonic “bor” means the “pine forest”) between Teutons and Slavians. There are the cities: Zossen (Slavonic: "sosni" means the pines), Potsdam (Slavonic: "Podstupim" means the “approaches”). Cölln (today Berlin) is a Teuton-Roman "colony". Berlin is the "bear lair” from the German "Bär" (bear) and "liegen" (to lie). Albert the Bear is the colonizer of Brandenburg.

The last fortress of the Rani was captured by the Roman-German colonizers only in the XII century. This was Arkona on the island of Rujan (German: Rügen), which is popularly named Buyan and mentioned in "The Tale of Tsar Saltan".

The modern Slavonic and Germanic languages are derived from the common ancient roots, and they have many consonant words of the same meanings (Russian is written in Polish alphabet for comparison):