The Sagnac effect emerges in the systems with a circular path of wave (beam), which are rotating in a plane of this path. The optical effect is best known and is discussed further. 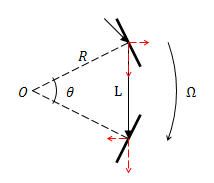 The circular path is created by any reflective surfaces, such as the mirrors, which are the secondary beam sources together with the primary source. Let the mirrors are arranged in a circle arc of radius \(R\) at an angular distance \(\Theta\) from each other. The dependence of the speed of light from the beam angle is compensated by the beam circular rotation so, that the average beam speed is the speed of light in the medium. The system rotation with an angular velocity \(\Omega\) alters the beam path length, because the beam speed is independent from the velocities of the source and the mirrors.

Each mirror moves at a speed \(\Omega R\) and at an angle \(\Theta/2\) of the beam. The longitudinal Doppler effect is compensated, and transverse effect at \(\Omega R\ll c\) is negligible. However, the rotating mirrors are sliding along the beam and varying its path length. This variation for each segment between two mirrors can be expressed similarly to the Doppler effect by the velocity along the beam: \[v=\Omega R\cos\frac{\Theta}{2}\tag{1}\] The path length \(L\) increment is expressed through the triangle area \(S\), which is formed by the beam and the two radii: \[\Delta L=\frac{v}{c}L=\frac{2S}{c}\Omega\tag{2}\] The path length increment for the system of mirrors is expressed by the total area of all triangles for each segment of the beam.

The annular waveguide (e.g., optical fiber) can be represented as the infinite number of mirrors at an infinitesimally small distance from each other, forming a circle. The path length increment, after the substitution of a circle area and length into (2), becomes: \[\Delta L=\frac{\Omega R}{c}L\tag{3}\] The equation (3) is valid also for a coil of length \(L\). This equation shows that the Sagnac effect is a variation in the path length of a beam, which is moving at its own speed regardless of the source and the receiver.