The Tesla coil is the most well-known design of a resonant transformer. Its efficiency is not known, because the output load is not connected.

The general principle is a transfer of the aetheric vortices between the windings. The common methods for the vortices creation are reduced to a circular radiation, e.g.: 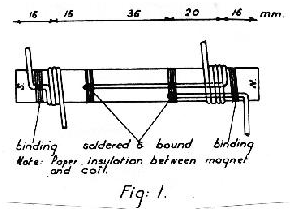 Hans Coler's coil or “Stromerzeuger” is a transformer with the windings, which are remoted from each other. The secondary winding is connected in series with a portion of the core between the windings.

The inhomogeneous field lines outside the solenoid intersect the electric field of the secondary winding at some non-zero angle. Coler had connected and set up a sophisticated system of the coils so, that it excites the resonant oscillations and the aetheric macrovortices, generating a free energy [1].

The load connection to the secondary winding of a resonant transformer allows a positive feedback by returning some secondary energy back to the primary winding. Thus, a transformer with the over-unity efficiency allows building of a free energy generator. This generator is started with the open-loop from an external electricity source, and then it operates with the closed loop autonomously.

Something like a car ignition coil, but with too large non-magnetic gap between the windings and the core.

An engineer Donald Lee Smith utilizes the pulse transformers with a non-magnetic opened core, which is only a framework for the windings with the adjusted positions. The primary coil, which produces an inhomogeneous magnetic field, is several times shorter than the secondary windings. The grounding is used for the electrostatic retaining of the vortices within the transformer.