The management structure is based on the natural properties of the life:

The technocratic civilization sets a human against the nature, amplifies his selfishness and gives him a power over the nature, and also over other people. The hierarchical (see "Kabbalah") power is achieved by deterrence of most people on a vegetable-animal level of their life. 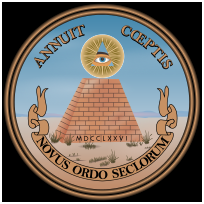 The reliable information is a key to the high-level power over those who do not have it. The knowledge is the same as an advantage of the guiding sighted person over the guided blind ones, the same as a light, which illuminates the darkness. In many Slavonic languages, the verbs "to know" (Russian: “vedat’”), "to see" (Russian: “videt’”) and "to drive" (Russian: “vodit’”) have almost the same root.

The authorities at all times tried to protect the crowd of the unwanted knowledge, and they even distributed the disinformation. This had produced a division of all knowledge into the secret elite knowledge and the mass public knowledge. The simplified diagram of the social elite evolution along with the modern technocratic civilization development consists of three stages:

The artifacts is a usual method to store and hide the information. The extinct ancient civilizations have left a lot of the obscure artifacts in a form of the megalithic structures and the skillfully manufactured products.

The ancient books were the valuable handmade artifacts, which were collected in the libraries and had a sacred and strategic importance. For example, it is believed, that the Library of Alexandria was looted and burned by the Romans, but it could be finally included into the Vatican Library, particularly into its secret archive. The printing invention in the days of Reformation had reduced the value and importance of the books. Since the Enlightenment, more authors emerged and yet more their books emerged, which become more and more entertaining and frivolous. In the recent times, the cheap newspapers are filled by a mercantile information.

Energy is a minor (after information) key to a power, which directly controls the life.

The free energy from the compact and simple generators can seriously undermine the power of the combustibles owners, which are the largest multinational corporations and a part of the world government. A lot of the electricity companies may also suffer due to decentralization of the electricity production and distribution. The cost of many goods and services will be decreased, increasing the overall social quality of life.

The mass media information on the new forms of the free energy is limited now to the "cold" nuclear fusion (see "Nuclear chemistry"), which promises a cheaper alternative to the existing nuclear power.

At the same time, some area of technology stays without the widespread attention. This area includes the patented inventions and the real products, which are related to a "perpetual motion" of some kind (see "Aetheric vortical machines"), which is persistently not noticed by the official science supported by the authorities. Examples:

The weapons and the armed forces is a third (after the energy and information) key to a power, which is required for the military intervention into an unmanaged process. The access to the weapons is limited, and there are always some secret weapons. The secrecy can extend not only to the technical information but also to the research areas, which are related to the effective weapons, such as: