The mitosis and meiosis are the long multiphase processes of the cell division within the multicellular organisms, which occupy approximately 10% of a cell cycle. They are featuring the unexplained phenomena in terms of the conventional microbiology: 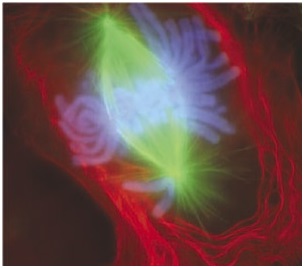 Spindle apparatus in a cell of triturus.

The mass of the dividing cells, in general, fills all available space, while the cells have enough food. The large enough amount of cells is forming a global morphogenetic field of the organism due to a large number of the simultaneous dividers. This field transforms itself with the organism development, and it distributes the proteins within its space, producing the initial differentiation of the stem cells. The result is a structure of the organism inside a protective shell, which protects the morphogenetic field from the excessive deformation.

The full value of the morphogenetic field requires a natural electromagnetic background. For example, the frogspawn in a magnetic screen does not develop to the viable tadpoles.

An organism with the sexual reproduction has a center, from which it grows from a fertilized egg (the first stem cell), and where are its germ cells or the seeds for its reproduction during lifetime. This center coincides with the root aetheric vortex center, which forms the morphogenetic field.

The development features of the various organisms are:

The tree is a self-similar (fractal) system of channels, which is typical for the plants, as well as for the blood vessels and bronchi of the animals. Its morphogenetic field is formed by the helical aetheric vortices. This is shown, for example, in the branches arrangement on the plant trunk/stem. The branching is based on the same scalable pattern over whole the plant from its branches to its leaf veins. The cross-sectional area of a channel, which enters a node, is equal to a sum of the cross-sectional areas of the channels, which outgo from this node, so the liquid/gas flow speed is the same over the tree, providing the optimum laminar flow.

The complicated organisms, such as the chordates (vertebrates), have a longitudinal aetheric channel, which connects several annular aetheric vortices along their body. The angle between the vortices axis lies in the bilateral (two-sided) symmetry plane of the body.

The real shapes differ from the ideal shapes for the various reasons: