The Mongoloid race is a special type of people, who was formed in parallel with the Europeans. This name comes from the Mughals. The Indians called so their conquerors from Central Asia, and then the British colonizers of India learned and spread this name over the world. The sparsely populated northern part of the fallen Qing Empire was calledMongolia in the early XX century.

The racial feature, which distinguishes the Mongols from Aryans and Semites, is absence of any national gods except the nature spirits. For example, the ancient Chinese worshiped to the wisdom, and the Japanese worshiped to their ancestors and the nature spirits (Shinto). The Buddhism came from India and became a kind of the racial religion, because it has no the gods, but Buddha is only a human and a teacher. The Chinese adopted the atheistic Marxism in the XX century easily.

The historic region of the Mongoloids is Tibet, which was as a refuge during the last Flood. The nomadic tribes had spread from Tibet and China throughout the ancient world. China is a center of the Mongoloid civilization (see "China and Japan").

The Mongolian nomads inhabited Siberia in the ancient times, becoming Yakuts (Sakha) and other nations. The Mongols called the marshland with birches as "shibir". The Tatar word "seber" means "sweep out" and is associated with the Siberian blizzards. The Old Russian word "siver" and the Lithuanian «šiaur» means the cold wind. The Russian word "sever" (English: "North") corresponds to Siberia, because the original Russian homeland is somewhere between Siberia and India (see "Rus'").

The nomads migrated from Siberia to the east and were combined with the white Indians of North America. The red Indians from Central and South Americas do not have too much mongoloid features. 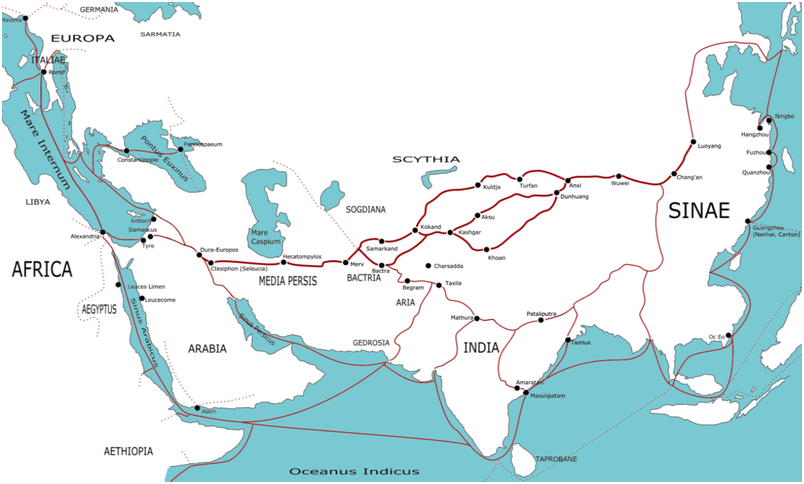 The Silk Road is the oldest bridge between the Western and Eastern civilizations. It existed since the Roman times before the modern times with some interruptions. The northern part of this way helped to develop Central Asia due to the beneficial trade and the caravans maintenance. The nomads also could get good horses, which were transferred into China from the West, and they could become the good warriors on horseback.

The Xiongnu is a nomadic warlike people, who appeared almost simultaneously with the Silk Road within the present-day Mongolia. The Xiongnu fought against the civilized Chinese (Han) and migrated into two directions, producing the sedentary peoples:

The Huns is the European common name of all the ancient nomadic peoples, who is somehow connected to the Xiongnu. The Northern Huns were not significantly different from the Scythians and the Eastern Slavians, so they are confused.

The Saka are the bearded (Turkic: sakal) Iranian ancestors of the Turkic peoples. The Saqaliba is an Arabic name of the Eastern Europe population.

Turan is a “tauruses” (bulls) land to the north of Iran. The Southern Turkic peoples are the Oghuz ("bulls" in Kipchak). 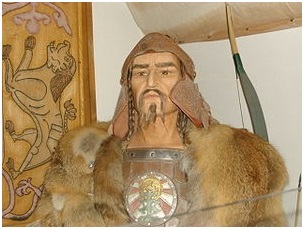 Attila of a Hungarian museum

Attila (V century) is a well-known leader of the Huns from the Volga region. His name comes from Atil (Itil), which is a Turkic name of the Volga River. Attila had united the Slavonic and Germanic tribes with the Huns. And he became a legendary king of the Germans and Scandinavians under the name Etzel/Atli, which is mentioned in "Elder Edda" and "Song of the Nibelungs". The Greeks called him the ruler of all Scythia, and the Roman Christians called him the Scourge of God (Latin: Flagellum Dei). Attila's Huns had conquered Britain, Gaul (present-day France) and had weakened the Roman Empire. The Western Roman Empire was then destroyed by the immediate Attila's successors. Bleda (Buda in Hungarian) is Attila’s brother, who founded the Hungarian Budapest.

The Hungarians (Ugric), who call themselves Magyars, are the distant relatives of Attila’s Huns mixed with the local Germanic-Slavonic population. The Germanic name Ungarn/Hungary has two roots: "hun-" and "-gar". The first root means "Huns", and the second one is common with the Bulgars' name. The Hussar is a descendant of an ancient medieval Hun, a noble horseback warrior in Hungary, then in Poland, and then in Russia since Peter the Great. The Hussars existed before the XX century.

The Bulgars (Balkars) is a tribe of Huns. The Volga River is a Bulgarian (“volgarian”) river. The Bulgars of Volga were named the Tatars in the times of USSR. The Southern Slavonic Bulgarians got their name after the Huns came into the Balkans and Hungary.

The Turkic languages are based on the Old Persian and the Uralic (Finno-Ugric). These languages were a lingua franca for the empires (from Attila to Genghis Khan), and they have a common basic vocabulary even in their modern forms (non-English words are written in Turkish alphabet):

The Huns and the ancient Turks had a pagan religion, which is unusual for the Mongoloids. It has developed under the Aryan influence. The pantheon of gods was headed by the supreme sky god "Tengri" or "Tenger" (from Chinese "Tiān": sky).

The Finno-Ugric peoples believed in the wise reptilian shapeshifters, who are the owners of gold and copper. So a Russian fairy tale "The Frog Princess" and an Ural tale about the "Mistress of the Copper Mountain" were born.

The Jewish merchants had a powerful influence on the Silk Road in spite of their small notability. The muslim merchant Ibn Khordadbeh (IX century) is a first writer about them. He called them the Radhanites (Hebrew: Radhanim, Arabic: ar-Razaniyya). The historians mention only that the Turkic elite was of the Jewish origin. The Jewish Khazar Khaganate tried to create the united Turkic Khaganate (VI century) after the fall of Rome. A khan is a Turkic ruler, who is subordinated to the great khan, Kagan or Kaan (Jewish Cohen, Kohen). The national Turkic ruler (head of a clan) is the Bek (Bey). The Russian word "kozyr-" (a trump suit) is derived from the ancient Russian "kozare" (Khazars).

The Pechenegs, Patzinaks (Arabic: Bajanak) are the Turkic nomads since the Khazar Khanate collapse. This name, as well as the Russian slang word "patzan" (a young guy), comes from the Ashkenazi Hebrew word “potz”, which was then transformed into Yiddish and English "putz".

The Chinese civilization area had reached its maximum by the XIII century. Western Liao or Kara-Khitan Khanate was formed in Central Asia. It was built by the Chinese model, so the Russian name of China ("Kitay") comes from the name of this khanate, which was located near Rus’. The Western names of China come from the Latin "Sinis", and the Chinese call their empire the "Middle Kingdom" ("zhong-guo"). One of the Kara-Khitan vassals was Khwarezm (former Persia).

Genghis Khan (XIII century) is the legendary Mongol Great ("Genghis") Khan and Khagan, who had united several separated Mongolic and Turkic tribes into the powerful empire, which had conquered Western Liao, Khwarezm and China. This empire bordered with India, Byzantium and Rus’. The personality and the detailed biography of this superhero is not reliably known, because even his tomb was not found as well as the tomb of Alexander the Great. Some known facts suggest an idea of the Mongol Empire origins:

Also some known facts suggest the idea about the real founders of this Empire:

Also some known facts suggest the idea about the reasons of this empire:

The Mongol Empire looks like a restoration of the Khazar Khaganate. The Kara-Khitan rulers were called the gurkhans instead of the khagans (Kohens). The Hebrew word "gur" means "baby of a beast".

Almost all the conquered peoples of the Mongol Empire were converted eventually to Islam: the religion of Arabs and Persians. However, religion and literature never played a big role in the Mongol-Tatars life. The writing system has been changed several times from Orkhon-Yenisey, Old Mongolian, Muslim Arabic to Latin (in Turkey) and the Cyrillic (in USSR and Mongolia).

Reconstruction of Tamerlane based on his skull

Timur (Tamerlane) is a conqueror like Genghis Khan, his successor and his distant relative. Timur was raised by the Sufis, and Islam was propagated throughout the Turkic world because of this. Timur was born and buried in Central Asia unlike Genghis Khan (a Mongolian, according to his official biography).

The Uhlans are the elitist special purpose warriors on horseback in the European armies before XX century. This name comes from the Turkic word "oylan" (guys). The original uniform was Mongolian, and then only a square Kalmykian hat left.