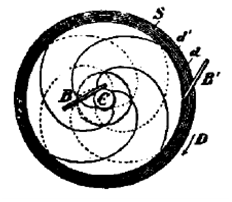 Tesla's unipoloar generator.
B, B’ are sliding contacts;
C is a shaft;
D is a rotating disc (cylinder);
d, d’ are circles of the disc and a magnet.

The Tesla’s unipolar generator is an improved Faraday’s generator. The difference is a ring magnet and a spirally sliced disc. The isolated slices of the rotating disc set up a direction of the eddy currents, which additionally amplify the magnetic field. The notes[1] also tell that such self-excited generator may not have a permanent magnet, if the rotor is sufficiently large (e.g. cylindrical) and the centrifugal force, which affect the electrons, is sufficiently high to produce the magnetic field.

There are rumors that the unipolar Tesla’s generator could be a "perpetual motion” machine, which continues its rotation with an electric load and without the external applied forces. The spiral currents may well produce a stable aetheric macrovortex. 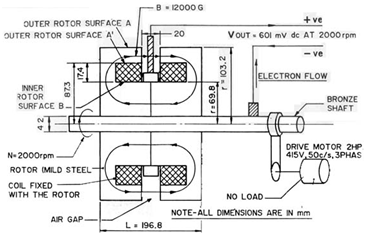 Paramahamsa Tewari's generator is patented in India as 397/Bom/94. The inventor has its own aether theory. He calls the aether the space, tells about its energy (the space power), and calls his generator the SPG (Space Power Generator). The aether is really the space in some sense.

The rotor of mild steel is attached to a nonmagnetic (bronze) shaft, which is driven by an electric motor, rotating at a speed of 2000 rpm. The electromagnet winding is wound inside the rotor (magnetic field lines are shown in the scheme), producing the flux of density 12,000 G (1,2 T). The nonmagnetic shaft makes the rotor as the ring magnet. Two brushes are contacting with the shaft and with the rotor surface inside the air gap. The voltage on the brushes and the short-circuit current are provided by the Lorentz force, which affect the rotor electrons. The following table is based on an article:

The rotor rotation in a magnetic field generates an aetheric macrovortex, which consumes the environmental energy and reduces a load on the motor, reducing its power consumption.

A physicist Bruce DePalma has invented a similar device, which is called N-machine, wherein the permanent magnet is used instead of an electromagnet.

A Canadian inventor Thane Heins made an induction motor with a magnetic rotor. This generator is called Perepiteia, and when it's overloaded, it speeds up instead of the expected slow down. 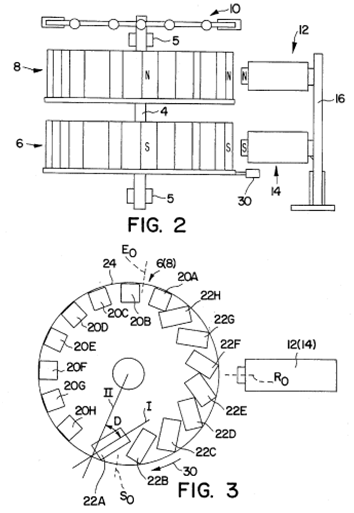 Howard R. Johnson has invented a magnetic motion method, where one pole of the mobile magnet is attracted to the motionless magnets, while the other pole is pushed from them. In the motor (U.S. Patent 4,151,431), which is built on this principle, the inventor has obtained an aetheric macrovortex, which supported the motor work without any power consumption.

Harold Aspden (PhD from Cambridge) together with an inventor Robert Adams from New Zealand has built the similar electromagnetic motors, which efficiency is more than 100%. The British patent 2,234,863 and U.S. Patent 4,975,608.

The Minato’s DC motor (U.S. Patent 5,594,289) is shown on the right. The tabular permanent magnets (22) and the nonmagnetic balancers (20) are installed on the rotating discs. The electromagnets (12, 14) are energized synchronously with the disc rotation, pushing the disc periodically. The original Minato’s design can operate without the electromagnets as "perpetual motion machine", when the rotation speed become large enough. The aetheric macrovortex arises within a toroidal magnetic field of the oppositely directed magnets, which are installed on two discs.

John Bedini manufactures such devices also. One of them is protected by U.S. Patent 6,545,444.