The transition probability from a laminar flow to a turbulent flow (to a chaos of the unstable vortices) is estimated by the Reynolds number, which is compared with its empirical critical values: \[Re=\frac{VD_H}{\nu}\tag{2}\] where \(V\) is a mean velocity of the flow,
\(D_H\) is a hydraulic diameter. 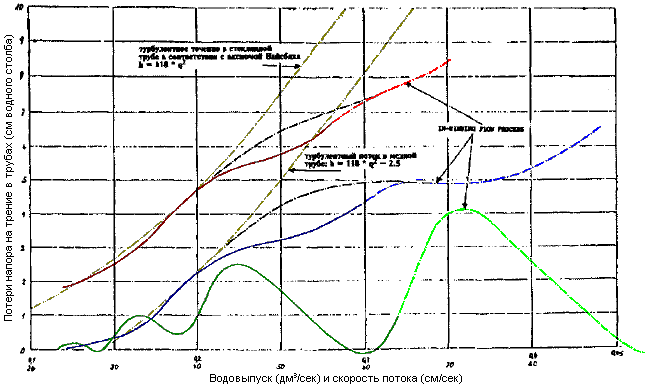 An inventor V. Schauberger proposed to direct the fluid by its natural helical flow, so that it would no longer whirls. The helicoid is a patented helical pipe, in which the water flow is rotated around the axis. Professor Fr. Pöpel [1] in 1952 had researched this pipe and had plotted the diagram of friction vs. velocity. The friction in the helicoid at the certain velocities drops significantly up to the negative values. This cannot be explained by a helical flow only, which reduces the friction due to decrease in the flow speed from the pipe axis to its walls. This effect can be explained by the aetheric macrovortices.

The aetheric macrovortices in fluids have two main causes:

The thermal action of the aetheric vortices in fluids has two ways: