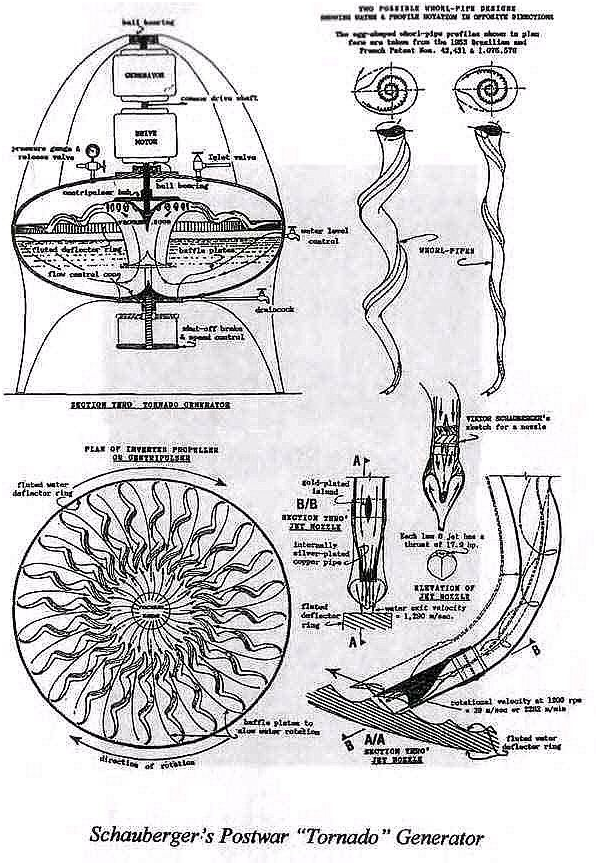 The key element of this device is a patented whorl copper pipe, a kind of the helicoid, which gives an extra energy to water. The silver and gold probably keeps the water purity in a closed reservoir.

The generator is launched by a starter (drive motor). The rotor operates as a centrifugal pump, sucking water through an axial hole into the helical pipes. Thr water jets are coming out from the pipe nozzles at speeds up to 1190 m/s, additionally pushing the deflectors and accelerating the rotor at speed up to 1000 rpm. The water flowing down to the bottom of reservoir is sucked into the rotor again.

When the water comes out from the pipes, a destruction of the aetheric macrovortices heats the water, as well as in Potapov’s heat generator. The water evaporation increases the pressure so, that the steam discharging and the additional water may be required.

The global annular aetheric macrovortex over entire reservoir is probably similar to the "Repulsine”. 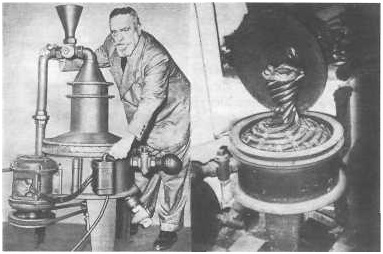 Some Shauberger’s machine (photo on the right) utilizes apparently a spiral water flow to create an annular aetheric vortex. The aetheric pressure at the cone apex is reduced similarly to the electric current effect in a conical coil. The vortex center is located within the ​​low pressure area.

Pump, with which Clem worked.

Clem’s motor is an invention, which was made by a simple operator of the heavy machinery independently of Schauberger. Clem has discovered the annular macrovortex effect in a conical rotor, when he observed an abnormally slow shutdown of the equipment for the liquid asphalt spraying.

The motor is launched by the start pump, which feeds the oil into the cone-helical channels of the rotor, where the aetheric vortices arise. The jets are coming out from the channel nozzles, and the rotor rotates at speed of about 2000 rpm. As the stream is not closed within the rotor, the aetheric vortices are destroyed and the oil is heated, releasing this heat through the exchanger before returning back to the tank. The rotor, which is enveloped by the annular aetheric macrovortex, works as a centrifugal pump without an aid of the start pump.

An internal combustion engine can run on hydrogen produced by the electrolysis of water. But the combustion energy of this hydrogen does not exceed the electrical energy consumed for its production. An extra energy of the aetheric vortices allows a water engine. Japaneese company Genepax creates such automotive Water Energy System (WES).