Kabbalah is a mystical branch of Judaism, which emerged in the Moorish Spain, and it was not affected by the Inquisition, which struggled against witchcraft, magic and other heresies. The Inquisition only expelled the Jews from Spain. This shows that the Catholic Church struggled actively only against the things, which are beyond the scope of Judaism and don’t give any benefit.

The main features of this teaching:

Some modern adherents of Kabbalah, as well as other sectarians, do their business by luring the gullible seekers of the spiritual development. The naive students are enjoying the "light" and paying money for it.

The Kabbalistic god is the source of light in the darkness, like the "morning star" or the angel Lucifer. This "star" illuminates the Kabbalistic hierarchy of the dark beings, who are afraid of "bright light". These creatures together with their god can be compared with the termites:

The Illuminati are "enlightened", who occupy the highest levels in the Kabbalistic hierarchy.

Chess is an exalted popular game, which was invented by Hindus or Persians and advanced in the medieval Europe. The Western and particularly English names of the chess pieces tell that a chess game is a fight between the two termite mounds:

The general strategy of the game is to protect the king and the queen, which are shielded by all other pieces. The Queen protects (supports) the attacking pieces, and usually it comes into play only after their loss.

English names of the pieces show that the main means of a colonization are the religion (Bishop) and the war (Knight).

Tarot is the corrupted Hebrew word "Torah" (teaching). The Tarot card set consists of the Major Arcana (22 trump cards as the 22 Hebrew letters) and the Minor Arcana or the standard 52-card deck + 4 cards.

The Fool (Jester) is the major trump, the highest wretched hierarch, who is served by own subordinates, to which he delegated duties and responsibilities.

The hierophant is a phantom (ghost) hierarch, as well as the real high priest, one of the Major Arcana.

The Major Arcana are not subject to the law and force, which are used for the management in combination with seduction and bribery.

The football (soccer) is a worldwide popular game, the rules of which had been finally formed in England of the XIX century. The 22 players as the 22 Major Arcana cards are involved in a match as well as in the cricket also. The soccer ball is a truncated icosahedron, which resembles the icosahedron-dodecahedron Earth’s structure (IDES). Thus, the soccer ball is a model of Earth, which is kicked and ruled by one of the two teams from Major Arcana.

Kabbalah is the basis of Hasidism and particularly the Chabad sect, which was founded in the XVIII century in Russia. Chabad is the modern branch in Judaism, which plays an important political role. One of the major experts in the activities of Chabad is the head of a small Jewish community Eduard Hodos.

The Freemasons ("free bricklayers"), in particular the architect Montferrand, had "staked out" a place in St. Petersburg after the French defeat (Patriotic War of 1812) by putting before Palace a column made of the polished solid piece of granite weighing 600 tons (!) with a masonic symbol (eye in the triangle). Similarly, the major Western powers were "staked out" in the XIX century.

The Washington Monument in the shape of a classical Egyptian obelisk is the highest (169 m) and the heaviest (91,000 tons) among such granite structures. It symbolize the center of the worldwide Jewish civilization. 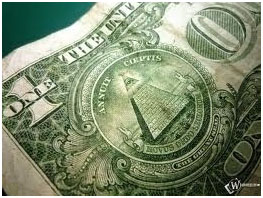 The Old Russian word "kabala" means the dependence on moneylenders, who are usually the Jews. The Americans are really in the biggest "kabala", because they have a huge debt.