The first "flying saucers" declassification has accelerated probably a transition from the alchemical magic of the Bell (see "Mercury") to the modern science:

This modernization was in accordance with the most advanced technology of the 1960s:

The operation principle of an MHD generator is based on the charge carriers separation, which are moving in a magnetic field. The actual design resembles a liquid jet engine with a special fuel. This generator has the low thermal efficiency (up to 20%), needs a special fuel, and has very complicated expensive design. The practical purposes of this device are formally presented as a small increase (10-20%) in the overall efficiency of a power plant by including the MHD generator as an intermediary before the steam boiler, as well as the special cases of improving the reliability and the quietness. But such generator is an ideal way to tap an energy part from the plasma aetheric vortical machine, which is an engine for a stealth vehicle:

Apparently, by the early 1970s, a new technology was already developed. After unsuccessful attempts to use the exotic MHD generators for the thermal power stations, they were gradually forgotten. An energy engineer Hannes Alfven, a prominent specialist in the plasma physics, in 1970 won the prize for an unspecified work on magnetohydrodynamics, which he considered to be the founder. In the same year the Kennedy’s lunar program budget was abruptly cut and this program was finished too early in 1972. At the same time, the interplanetary probes "Mariner" program was finished by the "Voyager" probes, which were sent into the obscurity with the messages for aliens. The official U.S. space program has become low budget and interested in the reusable Shuttles to lift the heavy loads into an orbit.

Footage above Paris at night in 2008

Since the 1980s, the UFOs, which are called the "Belgian triangles", was observed at Belgium massively in 1989-1990, at Chechnya in 2002, at Paris in 2008, and at Moscow in 2011. As you can see, all these locations are not in the active U.S. influence area, and they belong to the developed French-speaking countries and to the Putin's Russia. That is, likely the CIA reconnaissance flights occur under the "aliens" guise.

Back in 1968, a Soviet strategic bomber Tu-16 under command of V.I. Sopov has met a flying triangular platform with the lights in its corners [1].

An eyewitness Andrey Orlov, who served in Chechnya, said: «Early winter of 2002 at 2-3 o'clock in the night I heard the intensive talk from the radio set. I came closer and understood among a chaos of sounds that some stars are flying behind us, down in the valley. I went to the positions from which the western valley, which divides Terek Ridge in halves, was visible. I saw that at the bottom, 200 meters away, the strange object of a transport plane size and a triangular shape with three stars at its corners flied slowly».

The flat faceted shape (not necessarily triangular) significantly reduces the radar cross-section (RCS), and it is a part of the stealth technology. In the 1980s, the well-known stealth turbojet aircrafts F-117 and B-2 Spirit were also developed. They have a horribly bad aerodynamics of the "flying wing", a triangular faceted shape, which does not even provide a supersonic speed. These "flying flatirons" operation started almost at the same time when the "Belgian triangles" came, which look like the stealth aircrafts from a long distance.

TR-3A Black Manta is a classified reconnaissance aircraft of a triangular shape. 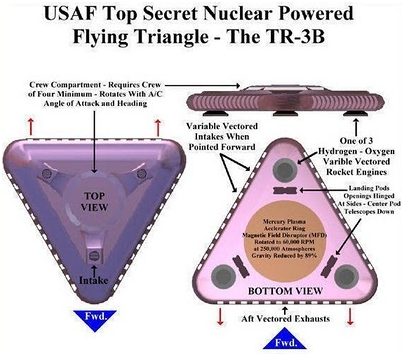 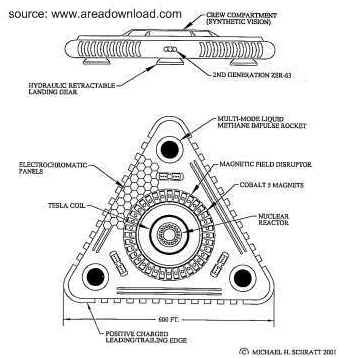 Edgar Fouché is an avionics engineer, who served as an U.S. Air Force sergeant during the Vietnam War (1965–1973). He is a descendant of the Napoleon's Minister of Police Joseph Fouché, and he ascribes to himself the name Rothschild. He became widely known after the mass sightings of the "Belgian triangles" in the 1990s, as the only available expert on the top secret U.S. Air Force aircraft TR-3B Astra (program Aurora).

The triangular shape of TR-3B vehicle, unlike a stealth aircraft, is reasoned by three additional engines in the corners, as three points of support.

Here are the claimed plasma characteristics and the comments to them:

The mercury density, which is estimated by the dynamic pressure formula, is: \[\rho=\frac{2P}{r^2\omega^2}\tag{1}\] So the mercury vapor density is about 2 g/m3. The motionless saturated mercury vapor has such density at about +100°C, and it has the corresponding negligible pressure of 30-40 Pa.

The negligible working mass of the sustainer engine provides the machine total weight loss by 89%. For comparison, the magnetic Searl's disc by Roshchin and Godin gives only 35%.

The U.S. widely use the ballistic rockets and the Space Shuttles for launch and repair the satellites, because it is difficult to hide the satellites presence, and hence their means of delivery. In the recent decades, the U.S. are very little concerned about the manned space exploration by the rockets, and they give gradually this occupation to the private sponsors:

According to a common folk theory, the lunar masters on the "flying saucers" interfere to realize the Kennedy’s dream of the Moon colonization. They also were interested in the Apollo on the long road to Moon in advance.

The martian fantasies of the modern private entrepreneurs-amateurs: