As they say, the Thule Society mediums (see "Flying cigars") in 1922 received an information on "Other-World Flight Machine" (German: Jenseitsflugmaschine). This machine consists of three discs of diameters 6.5 to 8 m, and a certain power unit. The upper and lower discs are rotated in the opposite directions by the power unit. The pendulum is mounted below to stabilize the flight orientation.

The power unit is obviously the Bell (see "Mercury"), which just consists of the parts, which rotate in the opposite directions. 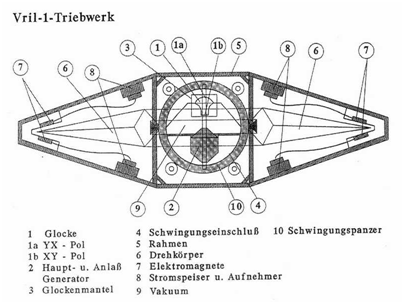 There is an engine scheme of the vehicle Vril-1 (Jäger) of 1942, whic is called the Schumann levitator.

A turbojet flying disc with a similar control scheme was later patented by some Heinrich Fleischner (U.S. Patent 2,939,648 of 1960). 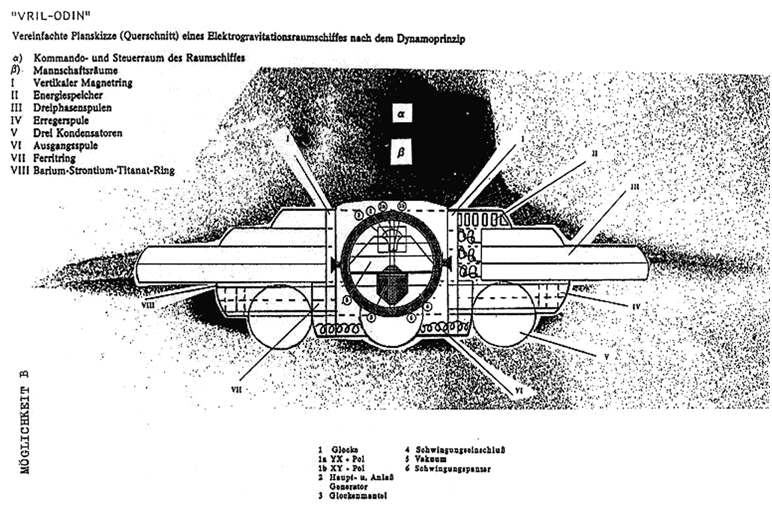 Back in the 1930s, the German inventor K. Schappeller has obtained a stable aetheric annular vortex in the solid body (see "Illumination"). Apparently, this invention helped to exclude a massive rotating body from one of the last Vril vehicle "Odin" (Vril-8) of 1944.

Ionized air at the bottom of "Vril-8", where the center of the aetheric vortex is.

The possible warfare at the end of World War II in case of the massive use of the Hitler’s promised “wonder-weapon” (German: Wunderwaffe) would be like a fantastic aliens invasion:

The German Bell based flying discs are taking off from the camouflaged protected bases and, moving with the enormous acceleration, are reaching the supersonic speeds. Being almost invulnerable to any fighter aircrafts and any anti-aircraft guns, they are grilling by the inexhaustible powerful rays, penetrating through the armor and even through the reinforced concrete, all the resisting forces in air, on land, on water and under water. Some flying discs, being marvelously shot down, do not have enough time to become a trophy, because the forefront is rapidly moving under the massive onslaught of all military forces, which prevent to collect the trophies. The Hitler’s opponents (the Allies) are beginning to explore the miraculously captured flying discs, but they have no enough time. The flying discs are rapidly invading at a safe height into a theoretically unlimited depth behind the enemy lines and are quickly finding out the positions of the strategic targets (bases, warehouses and the large troop concentrations). The explored targets are also bombarding by the invulnerable V-missiles and the long-range artillery. Several German nuclear bombs, which are made in the resource-limited conditions, are hitting the most important targets (industrial centers, capital cities). The war ends soon by the Third Reich victory over the whole world.

Such scenario did not come true due to the exhausting war with the USSR.

At the end of World War II, most of the technical developments and scientists of the Third Reich were seized by the U.S. intelligence, but the Soviet Union seized only the missile and nuclear technologies without their leading specialists (von Braun, Heisenberg, etc.).

The Manhattan Project was launched in 1943, but the first nuclear bomb emerged only in the summer of 1945. Perhaps the German scientists brought some knowledge gaps.

The bipolar transistor was unexpectedly invented in the american Bell Labs also in the summer of 1945, though they unsuccessfully tried for several years to create the field-effect transistor (FET) as a radio tube analogue. The German prototransistors [1] were used in the military radio communication and television already in 1940. The FET was created yet in 1958 on the planar technology basis. Both transistors are still the basis of the microelectronics.

The "flying saucers" phenomenon actually appeared in the USA and in other countries since 1947. First experience of the flights on the German flying discs in the same year resulted to the famous crash in Roswell, which was attributed then to the “aliens”. It is stated, that the accident was caused the powerful ground radar.

USSR at that time began to implement the Tsiolkovsky’s space fantasies, using the available ballistic missiles, which was equipped with the peaceful devices instead of the warheads. Since 1951, the dogs started to fly at first on the geophysical rockets and then on the space rockets. On the other hand, the U.S. Air Forces launched the rockets only from 1948 to 1952 with the monkeys to a height of not more than 130 km.

The key events chronicle in the USSR–USA relationship after the death of Stalin and Beria:

Perhaps as a result, the United States gave to USSR some secret technology such as the famous "Red mercury".