By the 1940's the German engineers somehow got the ideas of the flying discs (German: Flugscheibe), which resemble the helicopters invented by the time, but with a turbine instead of a helicopter rotor. But the turbine frequent blades, unlike the rare rotor blades-wings, produces a powerful descending air jet, which easily returns from the output back to the input due to the vertical pressure drop, forming a powerful vortex ring and significantly reducing the lift force. The VTOL aircrafts also have this problem. Therefore the trivial flying discs are the low-altitude hovercrafts such as Canadian Avrocar.

The real classified flying discs of the Third Reich were based on a non-trivial scheme, where the vortex ring was a principle in contrast with a conventional scheme. Therefore, the "flying saucers" are not similar to the traditional aircrafts and are always associated with the UFOs.

The repulsine (derived from Latin “repulsio”: repulsion) is a classified Schauberger’s turbojet for the flying discs, which are not related to the series of Vril or Haunebu. 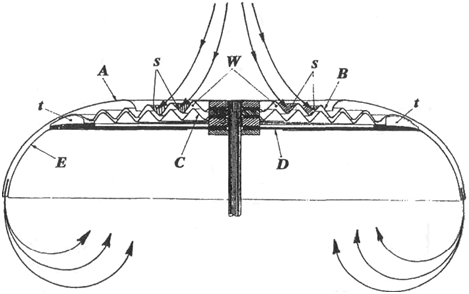 The turbine scheme, which is known from the public sources [1], is very similar to the Schauberger’s Austrian Patent 146,141 from 1940.

A is an outer casing;
B is an upper membrane;
C is a lower membrane;
D is a lower support plate;
E is an inner skirt;
W is an intermembrane space (working space);
s are air intake slots;
t are outer blades of the turbine.

The diagram shows just a variant of the multi-stage centrifugal compressor, the prototype of a modern aero-engine compressor. The motor, which rotates the turbine, is not shown. The reason why the exiting air flow is swirled towards the axis is not understandable. But the original Shauberger’s patent tells about a hollow shaft, which communicates with the intermembrane space and supplies the unknown necessary substances. These substances should result in the turbine motion as in a modern turbojet.

Also, a picture of the unclear origin, which is named a "windmill" by someone, is related to the Schauberger’s turbine. If this reservoir is connected to the centrifugal compressor shaft, and is filled with a water (painted area in the picture), which was preferred by Schauberger, then the principle of the whole engine becomes clear. The compressor produces a vacuum in the reservoir by pumping out an air, which is moistened by the intensively vaporized water. The water may be heated additionally. A part of the exhaust air is sucked back into the reservoir, and it is not returned back into the upper compressor intake. As a result, the whole system contains a helical vortex ring of the moist air, which can cause a tornado effect under the certain conditions.

The engine in a tornado mode has the unlimited efficiency, and it ideally consumes nothing but a liquid, which is lost due to the vortex passage through the atmosphere. The aetheric macrovortex, in addition to the turbojet thrust, produces the antigravity effect, if the central ascending aetheric flow covers the heaviest system part.

The repulsine was a prototype of the closed stationary power generator (see "Liquid machines"), which was called the post-war “tornado" generator.

Thus, the legend on the disc of some Belluzzo becomes plausible. This disc consumed the water only, and it was capable to any maneuvers and to the supersonic speeds of up to Mach 4 in those days, when the supersonic aircrafts did not even exist.