The Etruscans (endonym “rasenna”, “rasna”) is a people and a culture, which existed in the northern Italy (Tuscany) before its absorption by Rome. This culture became one of the foundations of the Roman culture. The lost Etruscan language, according to a historian A.D. Chertkov and an amateur philologist Tadeusz Wolanski, who is quoted by a historian E. Klassen[1], belongs to the Slavonic languages.

A small indigenous people currently lives in the Tuscany and speaks a language, which is close to the West Slavonic [2].

The facts about the Italian language:

The Tyrrhenians are some tribes, which are associated with Etruscans. Apparently, they are the Phoenician colonists from Tyre, who founded Carthage. The Etruscans knew astrology and the developed writing system (by Semitic rule, from right to left). The Etruscan alphabet became the basis for the Latin alphabet, which has the Phoenician roots. The Roman numerals have also the Etruscan origin and built on a Semitic principle: a numerical value is assigned to a letter. 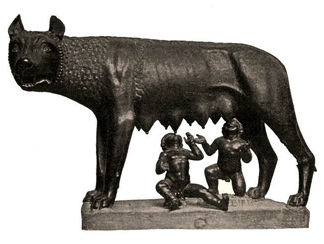 The Renaissance featured an interest to Antiquity and particularly to the Etruscans. So a lot of artifacts of allegedly Etruscan origin had emerged. One such example is a sculpture of the Capitoline Wolf. The restorer A.M. Carruba stated. that this is a medieval fake of the antiques, which is made in the VII-VIII century or later.