The refraction of beams emerges due to a difference of the wave velocities in the different mediums. The variable speed varies the wavelength.

The natural sources of the beams are the elementary particles of matter, which by their nature are sensitive to their absolute speeds. The wavelength of the beam source is the same in every reference frame, and does not depend on the speed of light in the radiation direction. The different speeds of light causes the different frequencies of oscillations inside the source. \[\lambda=\frac{c+\Delta c}{\nu+\Delta \nu}=const\]

The errors are comparable to the measurement accuracy, and they partially compensate each other, because either the longitudinal or the transverse error dominates at the different instrument orientations. Thus, this measurement gives the absolute speed of light with a small methodological error.

The radiolocation also utilizes the forward and backward reflected beam. The methodological error of the distance measuring does not exceed 1ppm. The radiolocation substitutes the optical method for measuring the speeds of the celestial bodies. 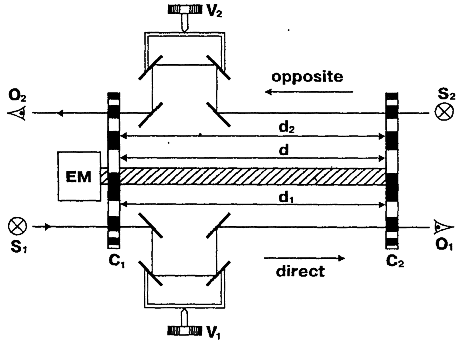 A researcher Stefan Marinov in 1984, who used the modified Fizeau method with the separate parallel beams and the coupled shutters, has measured the absolute speed of the Earth’s surface point.

The beam sources S1 and S2 are provided by one laser with the mirrors. The identical shutter discs C1 and C2 are rotated synchronously at a stable speed. The discs are arranged so that a beam, when passes through the full hole of the first disk, then passes through a half of the second disc hole, providing the high sensitivity to the beam speed variations. The receivers O1 and O2 are the photodiodes, which generate the EMF and currents, a difference of which is measured. The screws V1 and V2, by varying the beam path lengths, provide the balanced measurement of the speed deviations, zeroing out the difference between the photodiode currents.

This instrument measures along its axis the deviation of the observed speed of light from the absolute speed of light. The transverse (aberrational) deviation is compensated, because it is the same for both beams.

The instrument orientation along the Earth’s meridian at the latitude 47⁰N, provides a sinusoidal dependence of the "aetheric wind" from the time of day, with the peaks of about +1,4·105 m/s and –3,4·105 m/s.

The dipole anisotropy of the cosmic microwave background radiation was detected in 1969. It looks as such a radiation frequency Doppler shift, as if the Earth is moving at a speed 6,3·105 m/s with respect to the beams.