The atoms are composed of the electrons and the nuclei, the interaction of which is subject to the electromagnetic and mechanical laws.

The electron shells of the molecular and heavy nuclei are formed by the sedentary paired electrons, which are uniformly distributed by the forces of mutual electrostatic repulsion. The internal electrons of the heavy atoms are overlapped with the nucleus and are capturing by it with a high probability.

The existing scientific knowledge on the atom is mainly based on a visual observation of the absorption and emission spectrums.

An excited electron rotates around the nucleus, and the centrifugal force balances the electrostatic attraction. In the well-known equation for a hydrogen, the additional gravitational correction \((1+z)\) causes a red shift of the spectrum: \[\frac{m_ev^2}{r}(1+z)=\frac{e^2}{4\pi\varepsilon_0r^2}\tag{1}\] The nuclear field with a non-uniform (wave) density distribution can be represented as a system of the concentric rotating bodies, which shape the interchanging dense and sparse layers. The De Broglie waves, which are scattered by the electrons, are able to remain within the nuclear field, moving on the circular paths of the small radii, flowing around the dense layers, like a liquid or a gas, which flows around a solid body. The circular motion of the beam causes the interference, the maximum of which occurs only when the path circumference length is multiple of the de Broglie wavelength. With other circumference length, the beam is attenuated at each turn. The annular beam path is close to the electron orbit, and the non-attenuated beam returns most of the scattered electron energy back to the electron, so the corresponding orbit is much more stable than others, and it is called the allowed orbit. The electron on the non-allowed orbits without the external energy sources begins to lose own speed and reduces own orbit. The elliptical orbits are not supported also.

The ratio of the excited electron speed in a hydrogen atom (\(n=1\)) to the speed of light is called the fine-structure constant: \[\alpha=\frac{e^2}{2\varepsilon_0hc}\approx\frac{1}{137}\tag{9}\] The fine structure of the spectral line is its splitting into several closely spaced discrete lines. When the de Broglie wave turns around its orbit \(l\) times, the electron passes an orbital segment of length \(\alpha l\). The running wave is moving on the same orbit as the electron. The quantization condition depends on a small integer value \(l\): \[\lambda_nn=2\pi r(1+\alpha l)\tag{10}\] \[W_{nl}\approx W_n\left(1+2\frac{\alpha l}{n}\right)\tag{11}\]

The multi-electron excited atoms have a more complicated level structure due to the electrons interactions, such as:

The electrons don't interact in the excited hydrogen atom. The quantum mechanics calls this the degeneracy.

Influence of external fields on spectrum

The Stark effect is a splitting of the energy level within the external electric field and also within molecules and crystals. The level shifting is related to the potential energy of the external field. 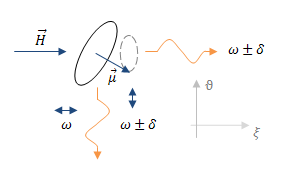 The Zeeman effect. The particle radiation intensity depends on a projection of the magnetic flux density at the radiation direction.