Androgyne is an asexual or hermaphrodite ancestor of humans (everyone or only the noble ones) in the Jewish and ancient Greek legends. Such legends are missing among other peoples.

Hermaphroditism in the animal world is widespread among the worm-parasites. Also the gender of lizards differs slightly, and it is not determined by the genetics but by the temperature of a maturing egg. Some fishes (the relatives of reptiles) change their gender during lifetime.

The Greek myth about a human of both genders: a son of Hermes and Aphrodite, Hermaphrodite, aged 15, has merged with a nymph who fell in love with him. Hermes is a god of commerce, profit, agility, cunning, theft and eloquence. Hermes is a suitable symbol for the Jewish nation. 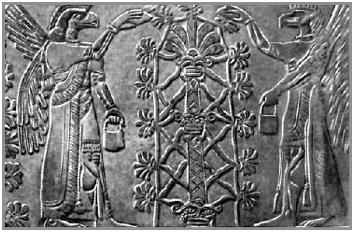 The tree surrounded by "angels"

Adam is a man of the biblical myth about the world creation. Adam was created after the ordinary men and women. According to the wrong translation of Bible, Eve was created from Adam's rib. But the Hebrew word "tsela", which is translated as "rib", denotes a geometrical edge or a side. Adam originally had two sides, but he gave to Eve one of his sides. The Tree of Life of the Kabbalistic (Jewish mystical) teaching is the geometric structure of two sides (male and female). This structure relates to the original man or the perfect man Adam Kadmon.

The Jewish and the Christian culture requires a monogamous marriage, that is, everyone is looking for his "half" or "side". This prejudice has nothing to do with the natural laws and the human psyche:

At the present time, the Asian population prevails in quantity and already replaces the Christian (former Christian) nations. Also, the Jews have a lot of the genetic diseases caused by the unnatural laws of the racial purity.

The Hebrew root "a-d-m" has a meaning of "man" (adam), "red" (adom) and "ground" (adama). Thus, a man can be associated with a red ground or a clay, from which the gods had made a human, as the ancient Babylonians and Muslims believe. The biblical story about the creation of Adam is a shortened version of an earlier myth about the creation of man:

The Quran tells about the creation of man from a blood clot in the sura al-Alak.

These myths show how the red-haired (the color of a clay) Neanderthals appeared, who were spread within the area:

This area almost matches the biblical world and the occupation area of the Semitic race before the modern times (colonization of the world).

Some figurines dating the IV-VI millenniums BC were found in Mesopotamia: 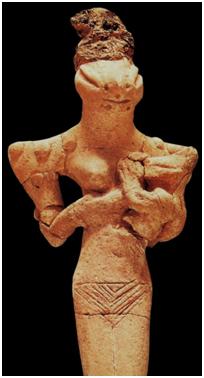 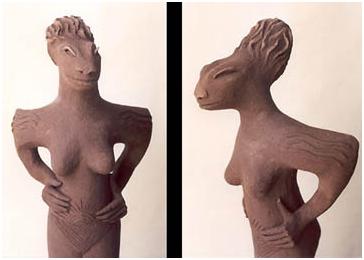 Perhaps, the "Anunnaki" gods, who created the Neanderthals, looked so. The dolichocephalic head of Neanderthals, which is found in the modern Semites and the reptilian features are strongly marked. Perhaps, the images of gods in Judaism and Islam are forbidden not accidentally. If the God had created man in his own image: (Genesis 1:26) «And God said, Let us make man in our image, after our likeness», why the gods are so different from the ordinary people?

The Original sin is a taboo on the natural way of life, which is called in Bible the knowledge of good and evil. The Jewish religious term "daat" is usually translated as "to know", but it has a second kabbalistic meaning "to connect". The Good and evil corresponds in this case to the light masculine and the dark feminine. See also «Life energy» and «Kabbalah».

The biblical description of Adam, Eve and the serpent-tempter (Genesis, 2-3) with the Jewish root "a-r-m" has two meanings: "naked" ("arom") and "cunning" ("arum"). The official translation states that the humans were naked, and the seprent was cunning, although other variants are possible. A serpent is really the most naked of animals, because it has no hair. Besides, the serpent (Genesis 3:14) was a walking humanoid, because he could communicate with Eve. Considering also that the northern (Germanic, Slavonic) languages and Sanskrit (see “Indo-Europeans”) are similar, it can assumed that all the three were the common South-Asian serpent-people, who are called “naga” (sounds almost like “naked” in many languages) in Sanskrit and "nehesh" in Hebrew.

The story about punishment of Adam and Eve (Genesis 3:16–21) is a metaphoric story of the replacement of Neanderthals with Cro-Magnons (modern type of a human):

Cain (Arabic: Kabil) and Abel (Arabic: Habil) are the sons of Adam. The legend of Cain and Abel determines priority of the animal husbandry (job of Abel) over the agronomy (job of Cain). All Semites agree with this. The animal husbandry in the Jewish sense goes beyond the agriculture and applies to the human society, which is divided into the "elite" and the "cattle". In all the Slavonic languages except Polish, the word "to repent" (Russian: kaya-tsia) is derived from the name of Cain, who killed Abel out of envy.